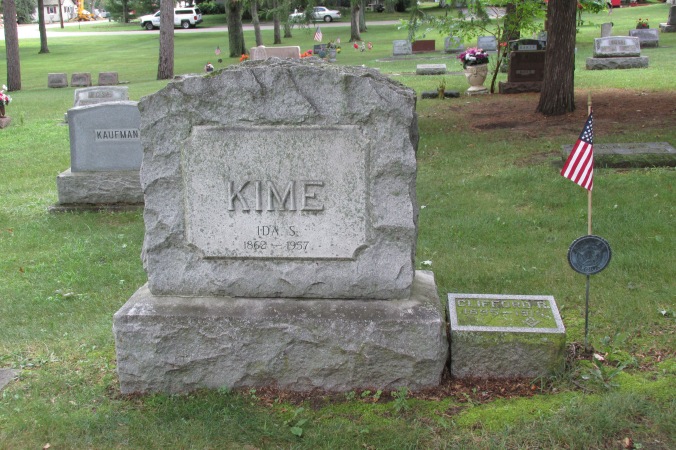 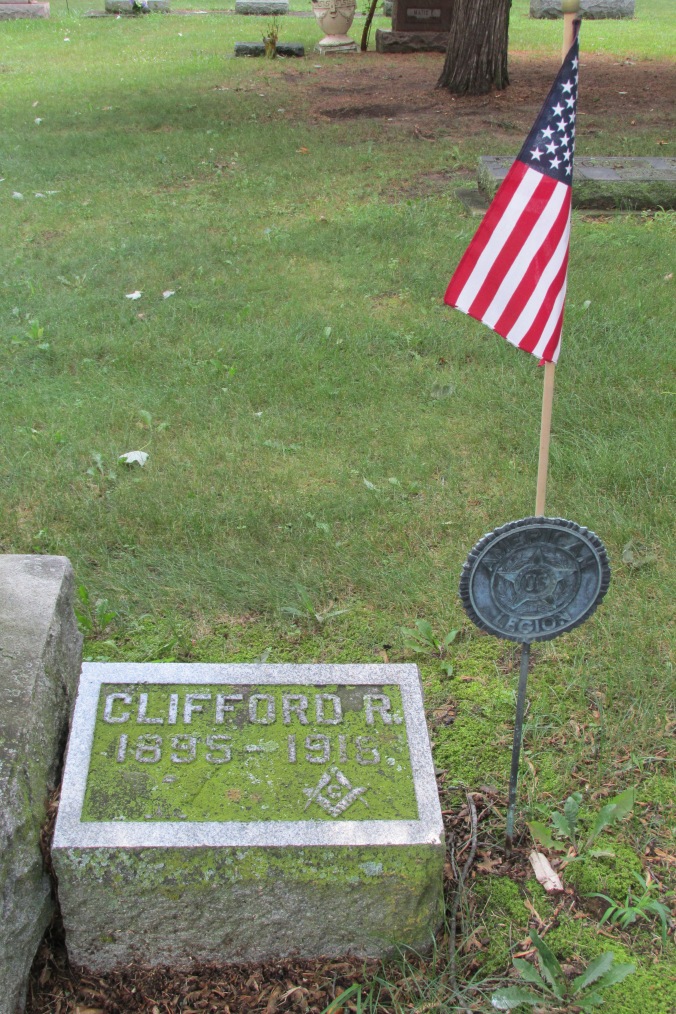 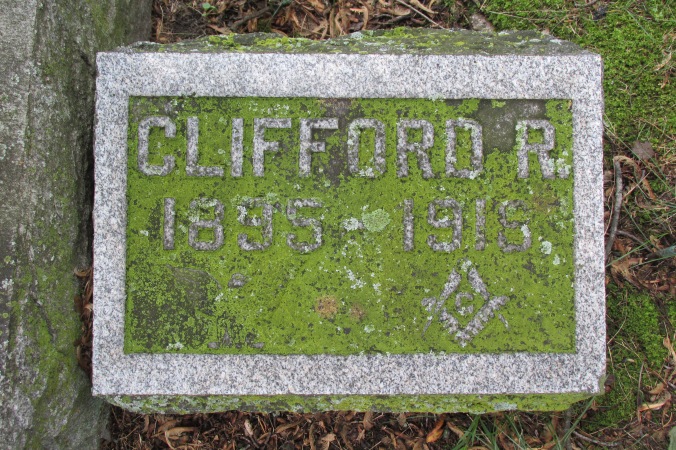 Above: The markers and resting place of Clifford R. Kime in Breckenridge’s Ridgelawn Cemetery.

Note: This is the second part of thirty articles that will run in 2018 to commemorate the lives of thirty Gratiot County men who died serving their county, state and nation during The Great War. These thirty men are named on the Gratiot County All Wars Memorial in Ithaca. Each article will run on the centennial anniversary of that man’s death.

Clifford  Kime was the second Gratiot County man, and first Navy man, to die in the service of the United States during the Great War. News of Kime’s death reached Breckenridge just a few days after his death on February 19, 1918 at Carney Hospital in South Boston, Massachusetts.

Clifford Ray Kime was born on March 20, 1895 to Jacob and Ida Kime in the Midland County town of Porter.  He was the middle of three , sons. The Kime family moved to Breckenridge in 1908 and Clifford graduated with the Breckenridge Class of 1913. At some point  prior to the war Kime’s father went to work for the Republic Truck Company in Alma.  Kime served the next four years as a druggist clerk in Breckenridge and Detroit. He then took an examination to become a registered druggist through Ferris Institute. During the summer of 1917, Kime worked in Houghton, Michigan, but when the call for military service came his name was the first name on Breckenridge’s registration list. Clifford Kime  willingly answered that call.

Kime initially enlisted as a volunteer in the Navy’s medical corps. He left for the United States Naval Training Station at Newport, Rhode Island  on September 13, 1917.  His family and friends saw him at Christmas when he came home on a two week furlough. What was Clifford Kime’s biggest regret at that time? Only that he claimed that he would  have enlisted as soon as war had been declared  that spring. Kime believed that all young men in Gratiot County should join up to defend what was right and to fight Kaiserism.

Shortly afterward, he transferred to the Radio Service and in January 1918 he took course work at Harvard University.   During this time he contracted pneumonia and died after a three day illness. In remembering Clifford Kime, it was written in a local newspaper that “Clifford was always of a cheerful disposition, energetic, possessing a winning frankness that guaranteed him an ever increasing number of friends wherever he went.” He also had been a member of the Breckenridge Masonic Lodge and the Men’s Bible Class of the Methodist Sunday School.

After his body was returned to Breckenridge, services were held before a large crowd at the Methodist Church. The text from the pastor on that day that typified Kime’s service was taken from John 18:37. It read, “To this end was I born and for this cause came I into the world.” Among the family members he left behind was his niece and namesake, Virginia Clifford Kime. After the funeral, Clifford Ray Kime’s body was laid to rest in Breckenridge’s Ridgelawn Cemetery. 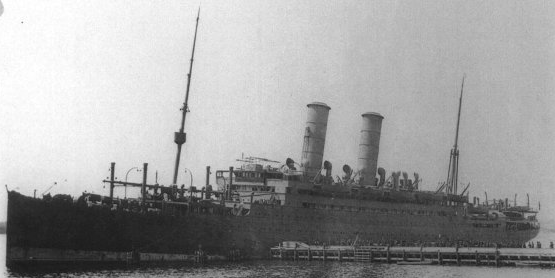 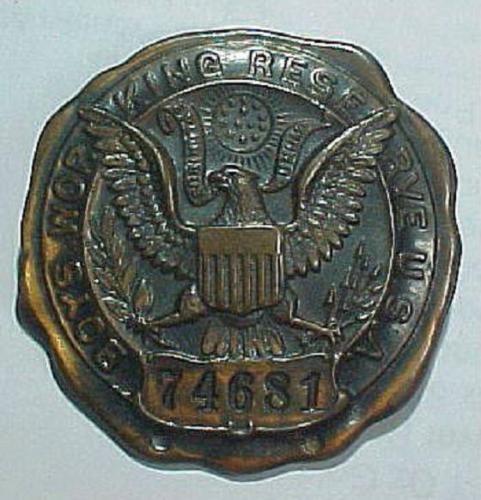 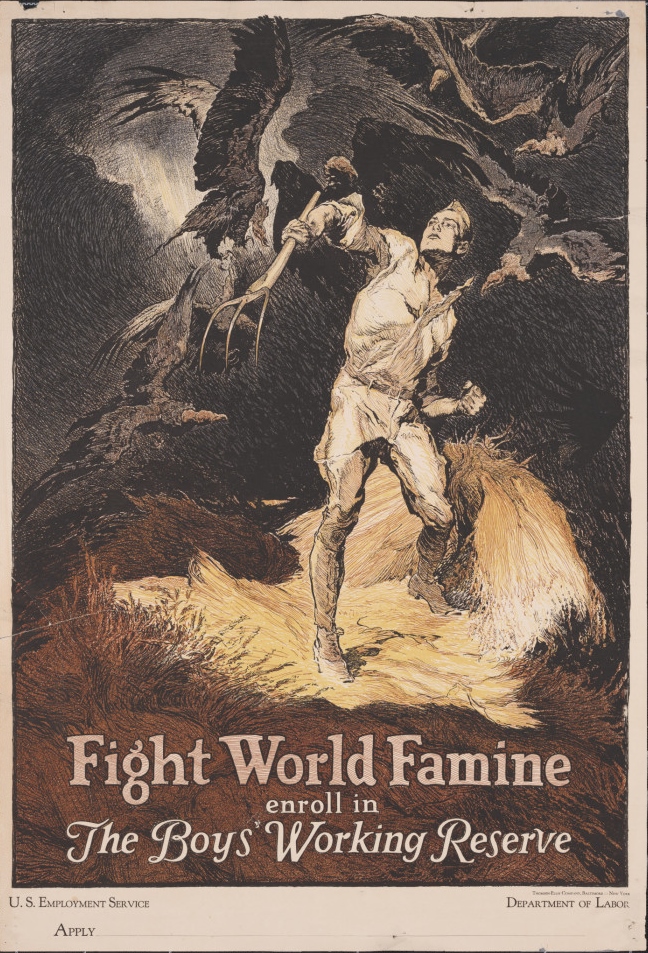 In February 1918 Gratiot County got the message about the cost of lives that were connected to  American involvement in World War I.

A major shock came in early February with the loss of the SS Tuscania, a transport ship and former Cunard luxury liner which carried 2, 179 soldiers to Europe, along with 383 crew members. The German U-Boat, UB-77, sank it on the morning of February 5. It took four hours to sink and 210 on board died. Newspapers focused on the sinking and although many Michigan men of the 32nd Rainbow Division were aboard, no Gratiot County servicemen were named in the reports. This event accompanied the news at the end of the month concerning the death of a Gratiot County soldier, Clifford Kime, from Breckenridge. Kime died from complications of tonsillitis and pneumonia in a Boston area hospital. Together, these events in February brought home the reality of the war to Gratiot County.

Enlistments from Gratiot County remained strong because many Gratiot County men volunteered to serve their country. February saw almost 40 men step forward to serve Uncle Sam. Recruiting Officer Tom Boston had been in Gratiot County for nine months and he had helped almost 300 men to enlist during that time. Still, the draft board remained busy and examined 279 men on February 18-19. At least 75 in the group were going to be sent to Georgia training camps in March. Because of stricter regulations, fewer men were being discharged.

Anyone who questioned Gratiot County’s patriotism needed to only count the number of service flags that were being donated and flown in various places. Alma College dedicated its service flag on Lincoln’s Birthday, accompanied by a speech by former Michigan Governor Chase S. Osborne. It had 72 stars on it when it was ordered (one for each former Alma College student serving in the war), however, by the time the ceremony took place it was thought that over 100 students were in the service. Alma High School ordered a service flag with 55 stars, but it too was thought to need more stars by the time it arrived. Churches also joined the flag raisings. Alma’s Methodist Episcopal Church invited service families from the congregation to recognize approximately 20 soldiers connected to the church when it dedicated its own flag. While Alma was in the news, many areas of the county, including schools and villages, had their own flags on display.

The Red Cross became even more organized and kept the county informed of its needs, as well as its accomplishments. A new weekly column appeared in the Alma Record entitled “Alma Women in War Work” and it ran weekly throughout the rest of 1918. Women were urged to come and volunteer their time in one of four departments which worked on gauze, bandages, hospital garments or knitting. The Alma Red Cross even encouraged women to take work home to help out so that “no woman in this vicinity is to be known as a ‘slacker’.” Still, when $75 worth of yarn was distributed to knitting parties in January and nothing had been turned in, a gentle reminder was issued in the newspaper that people who had the material needed to turn in socks, helmets, sweaters or wristlets. More pressure was also put on women through the newspaper to register with the Red Cross “who (are) loyal to our Government” in order to help serve the country.

The Red Cross also started a tradition with community singing.  After each program, someone  gave a talk that explained what people could do to be involved in the war effort.  These sometimes brought as many as 400 people to the services.  When the Red Cross had to vacate its headquarters in the Pollasky block it temporarily moved to the reception room at the Oddfellows Temple. Eventually, it ended up at the Masonic Home.

Looking ahead to spring, the county worried about what could be done about potential food shortages. Among one of the biggest problems was the issue of the lack of farm help. The United States Boys’ Working Reserve program actively sought 700 young men, ages 16 to 21, who could work on Gratiot County farms. In 2017 it was estimated that 200,000 boys across the United States had become involved in the program.  While F.M. Harrington of Ithaca looked for recruits in the area, some farmers in the county objected to having city boys for labor. Still, if they really wanted help they could not be picky. One farmer lamented in the Alma Record that “if you can’t send me an experienced man, send me a boy –as husky a one as you can find.” When he stated that he had 80 acres to farm, 8 cows, some hogs, 15-20 acres of corn, 10-15 of oats – and hay, wheat and pasture – any recruit would quickly find that he would have plenty of work to do.  Regardless, the program was offered as a patriotic way for young men to serve in Gratiot County’s war effort.

Then there were chicken rules, fats, and sugar. The United States Food Commission issued a new rule that starting April 1, 1918, it would be unlawful to purchase or kill live fowl or pullets. It was hoped that this would help with preserving the nation’s egg supply. Violation of the law could result in a fine of $5,000 and two years in prison. However, the new law affected many farmers’ wives who had previously counted on chicken and egg money. While people in 1918 needed a certain amount of fat in their diet, Americans were called to remember the suffering of women and children in Europe. Gratiot County women were urged to save butter and serve meat gravy in its place at dinner. They were also told to save lard and butter and not to use it in cooking. Deep fat frying was to be done sparingly. Fats that could not be used any longer were to be kept for fall soap making or house cleaning. Sugar consumption was to be limited to 3-4 pounds per week per person. This was not easy. When a store in Alma had a new sack of sugar the word quickly got out and brought lineups at the counter. Cottage cheese was also viewed as a great substitute for meat by adding cream, milk, chopped onion or green peppers to it.

Other anticipated shortages in 1918 included binder twine. People were encouraged to buy a soldier a Smileage Book and mail it to him.  The books allowed soldiers to see entertainment at Camp Custer’s Liberty Theater. They sold out quickly in Ithaca. E.Berman and Sons in Alma wanted scrap iron. And then there was the chorus to a popular song that echoed the times, the war, and the yearning for sons and husbands to come home:

While your heats are yearning;

Though your lads are far away

They dream of Home;

Through the dark cloud shining,

Turn the dark cloud inside out

Till the boys come Home.”