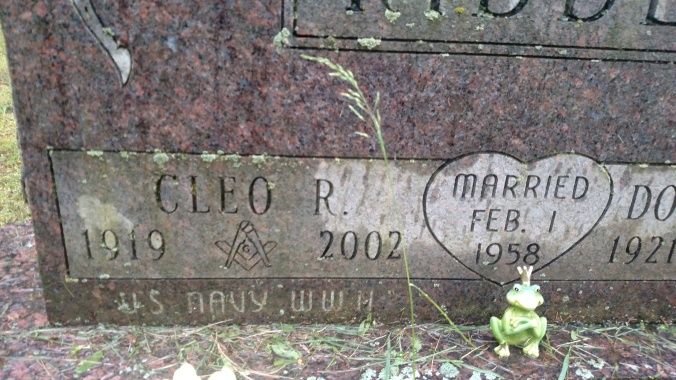 Cleo Raymond Riddle was born May 4, 1919 to James and Lizzie Riddle in Edgewood. He was one of three children and served Gratiot County in the U.S. Navy during World War II. In March 1943 he entered the Navy and attended boot training at Great Lakes Naval Training at Great Lakes, Illinois. Cleo was 23 years old. By late May 1943, Cleo was sent to Gulf Port, Mississippi for four weeks. By July he had returned to New York City. In October he wrote home to his mother from “Somewhere in South America.” About his assignment he wrote to his mother, “It’s so hot here. We aren’t far from the equator. There are lots of bananas and coconuts. I will probably freeze when I get back (home). It rains almost every day and it sure is welcome.” He also mentioned how water was rationed and that there were five men from Michigan in his gun crew. He eventually would end up in the South Pacific. After the war, he worked Cleo married Doris Allen. He went on to become a Mason, a member of the Ithaca VFW Post #7805, a member of the Ithaca United Methodist Church, and a 4-H leader. Cleo Riddle passed away on June 27, 2002.  Cleo Raymond Riddle is one of many Gratiot County men and women who served their country, state and county during a time of war. He rests in Pine Grove Cemetery. 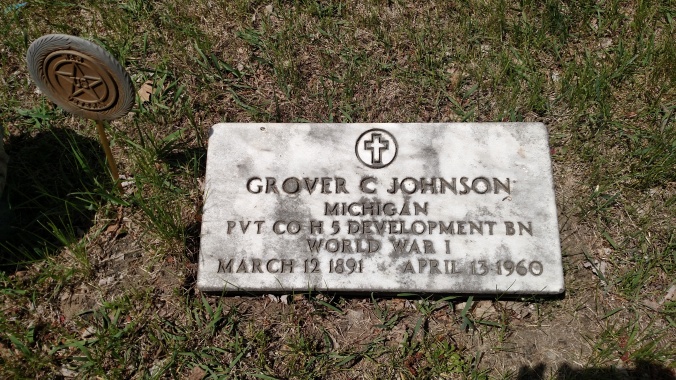 Grover Cleveland Johnson was born May 11, 1891 in Perry, Michigan. His parents were James and Marilla Johnson. Not much is known about Grover’s personal life, however, his mother passed away before the start of World War I. Prior to entering the service Grover worked as a teamster. On May 11, 1918, as a private,  he entered Columbus Barracks, Ohio. He was sent to Camp McArthur, Texas one week later and served in Company A in the 19th Machine Gun Battalion.  He was then transferred to Company H of the 5th Development Battalion. Due to the end of the war and demobilization, Grover was discharged on November 19, 1918 – just over one week after the Armistice took place in Europe. After the war, Grover worked for the Furnstedt Manufacturing Company. He eventually married and moved to Washington Township around 1950. Grover Cleveland Johnson died on April 13, 1960.  He is one of many Gratiot County men and women who served their country, state, and county during time of war. Grover Cleveland Johnson is buried in North Star Cemetery. 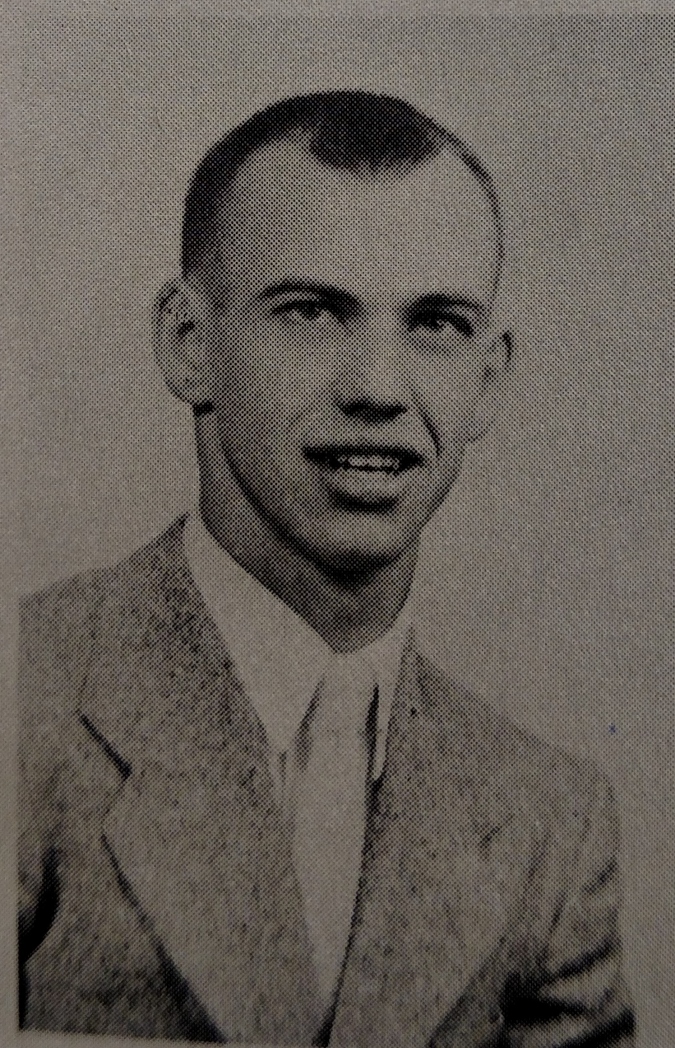 Robert Carl Olson was born June 2, 1933 in Emerson Township to Clark and Lucille Olson. Bob was a life long resident of the Ithaca area. He was a 1953 graduate of Ithaca High School. The saying on Bob’s senior picture read, “I have a hot rod Ford and a two dollar bill. Bob married his wife, Sally, in 1956. Together they raised their children in Emerson Township. Bob worked for and retired from General Motors. He was a charter member of Pheasants Forever and White Tails Forever. Bob passed away on September 10, 2006. He is one of many Gratiot County men and women who served their country, state and county. He rests in Pine Grove Cemetery in Emerson Township. 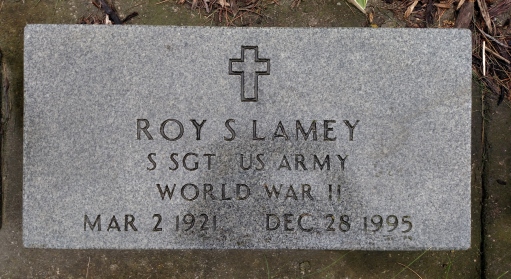 Roy S. Lamey was born March 2, 1921 to Thomas and Lydia Lamey in North Star Township. One of nine children, Lamey’s parents were farmers and records show that they operated a 130 acre farm in 1927. In early June, 1942 Roy was one of 45 men who were drafted that month. They became part of 76 from Gratiot County at this time who went to Detroit by bus to take their examinations. For one of the first instances since war was declared after Pearl Harbor, there was no ceremony for this group of Gratiot men. All of them received a dinner at the George W. Myers American Legion Post before they left. Also, the Alma Chamber of Commerce provided the men with treats for their trip. Roy’s draft number for Gratiot County was #10178. Roy Lamey eventually became a staff sergeant and served in the European-African-Middle Eastern Theater. He was honorably discharged on October 22, 1945. On October 4, 1945 he married his wife, Dorothy, and together they raised 4 children in North Star Township. Roy farmed there all of his life. He passed away on December 28, 1995. Roy S. Lamey is one many Gratiot County men who served their county, state and nation during time of war. He rests in Brady Cemetery in North Star Township.

Jerry J. Grigar was born January 24, 1925 to Thomas and Elizabeth Grigar. Jerry graduated from Fulton High School in 1943. His graduating motto was : “Studies are important but keeping up my social life in Bannister is more important.” He participated in FFA, boxing and football while in high school. On his eighteenth birthday he registered with the local draft board because of the war. His address was RFD No. 2, Ithaca. On June 17, 1943 Jerry was selected for the United States Navy and reported to the U.S. Naval Station at Great Lakes, Illinois. After the war he married Wanda Traver, became a farmer and together they raised four children. Jerry  passed away on May 25, 1981 as a result of a farming accident. Jerry J. Grigar is one of many Gratiot County men and women who served their county, state and nation during a time of war. He rests in North Star Cemetery.

Above: Advertisement from Gratiot County Herald, late May, 1917.

In May, 1917 Gratiot County started to act like it was joining a world war. Early in the month conscription was announced, although it would be a month before it actually took place.  On May 7, a letter was sent from the County Clerk to all township and precinct supervisors telling them that they would soon be the ones acting as registrars for making lists of all men eligible for military service.

Each week the names of those young men who first volunteered  to enlist appeared in the newspapers. Names like Cecil Stockwell of North Star and Louis Hetzman and Orin Riker of Ithaca left for the army. A year later, Riker would be the first Ithaca boy to be killed in the war. The government established officers training camps in anticipation of the draft that was to come.  Gratiot County donated $1,000 to help the YMCA toward establishment of a building in each military camp. Places like the one in Fort Custer would give soldiers opportunities and libraries to write letters home, a place for them to spend their leisure time,  and a place for “clean living campaigns,” which supposedly encouraged religious values.

There were also plenty of things that Gratiot County residents could do and were expected to do to support the United States in wartime. The Gratiot County Herald warned readers that every citizen had to do something to meet the crisis. Every foot of land that could be used as gardens had to be cultivated. Farmers also needed to receive extra farm help and the necessary seed to grow more crops.

In response, a large crowd of people came to a meeting at the Ithaca court house to address what citizens could do about an impending nationwide food shortage. Although farmers were being encouraged to plant as many crops as possible, the cost of seed had skyrocketed, making it too expensive for some farmers to purchase. One topic at the meeting was how to make bean seed available to farmers through loans.

The head of the Gratiot County YMCA,a  Mr. Curtiss, said that he had organized 300 boys who would be willing to help cultivate plots of land a half acre to acre itself. Vacant lots in Ithaca were also discussed as places where residents could grow more food.  The YMCA group offered to help residents put up gardens in these locations.

Other things were in the works to support the nation at war. War taxes were coming. In addition to a raise in income taxes, taxes on movie tickets, railroad tickets, whisky, railroad freight, cigars, heat, light and telephone bills, telegraph messages, even the purchase of musical instruments – all of these were imposed to help raise revenue for the war.

It was during May, 1917 Gratiot County’s involvement with the Red Cross started.  On May 18, another group of people met in the Ithaca court house to officially form the Gratiot County chapter of the Red Cross. A temporary committee  set up the chapter and accepted 43 applications from people in Ithaca who wanted  membership. It was intended that local units would spring up across Gratiot County and that a yearly membership would cost only a dollar.

Liberty Bonds became another way citizens could participate in the war effort in Gratiot County. Local bankers in the county wanted residents to buy bonds, whether they lived in the larger towns of Ithaca, Alma and St. Louis – or the smaller of hamlets of Perrinton, Middleton, Bannister, North Star or Pompeii.  A $50 bond was offered to a buyer at 3 ½ percent and helped the government  to buy shoes, clothing and munitions in Europe.  Any bank in the county sold the Liberty Bonds. In some cases, people like James Anstey of Ashley Encouraged fellow citizens to buy these new bonds. At age 83, Anstey went out on one Friday morning managed in two hours to talk to forty people and sold eleven bonds.

Preparation for war was on.