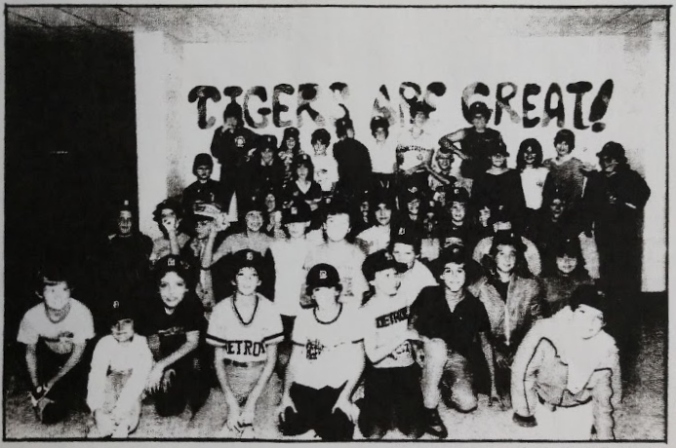 In mid-0ctober 1984, Alma College announced that it was going to build a new sports facility. A Central Michigan News employee thought he was about to claim a $5 million Michigan Lottery prize. Also, the Breckenridge Village Council debated authorizing a $500 contribution to Greater Gratiot Development, Incorporated. However, in the Gratiot County headlines on October 14, something happened that Detroit Tigers fans in Gratiot County craved for sixteen seasons: the Tigers won a World Series Championship. On that day, their wishes came true. The Detroit Tigers defeated the San Diego Padres four games to one in old Tiger Stadium.

For the better part of seven months, Gratiot County witnessed the effects of an incredible 35-5 Tigers start that allowed the team to lead everyone from wire to wire. It was a once in a lifetime season that began with people saying, “Don’t ask if the Tigers won today. Just ask by how much.” In October, many fans in the county tuned their televisions to the World Series that ran from October 9 – October 14.

Before the start of the World Series, Tigermania swept through Gratiot County. Sixth-grade students at St. Louis T.S. Nurnberger Middle School wore Tiger hats and shirts. They then created a banner and posed in front of it for photographer Susan Cook. Over at Hillcrest Elementary in Alma, first graders there made imitation Tigers, pin-ups, and pennants out of bright orange paper.

While many people witnessed incredible Tigers comebacks and “The Wave,” the 1984 season was a little different from 1968, when the Tigers came back to defeat the heavily favored St. Louis Cardinals. One significant difference was the absence of local connection the 1984 team – there was no Jim Northrup (a St. Louis graduate and Alma College athlete) this year. Still, Gratiot County, like the rest of Michigan, had the hunger and experienced the excitement of a World Series Championship.

After tying the series at a game apiece, the San Diego Padres went to Detroit and promptly dropped the next two games. The Tigers were ready for a quick victory in game five.  However, when the Padres refused to give in,  Sunday night proved to be one to be remembered when Kirk Gibson’s home run in the eighth inning sealed it.  American League MVP and Cy Young Award winner Willie Hernandez closed the game for the title. Alan Trammell earned the 1984 World Series MVP. Inside and around the old ballpark at Michigan and Trumbell,  many fans went wild.

Two local people who were at Game Five described what happened in and around Tiger Stadium. Diane Mancina, a Central Michigan University senior, remembered seeing people coming out of the stadium after the game with portions of sod from the outfield. She reported, “We saw all kinds of people coming out with sod…One guy’s face was filthy, it looked like he burrowed in it. He had a whole roll (of sod), and I got some.” Mancina later gave it as a souvenir to her father. (Some of my in-laws who also attended Game Five did the same thing and kept their part of Tiger Stadium in a unique planter at home).

Mancina also recalled seeing similar sights after the game that many Tigers fans disliked. Some of the unruly behavior included the throwing of bottles, fans helping themselves to vendors wares without paying for them, overturning a police car, and seeing police officers on horseback. One member of the defeated San Diego Padres, Terry Kennedy,  praised the Tigers for their World Series win after the game. He then quipped that he just hoped to get out of Detroit alive.

Morning Sun Staff Writer Jim Knight was also on hand at Tiger Stadium that night. In addition to seeing the police car overturned, Knight said that he saw similar things happen to a motorcycle and a cab. “This wasn’t 1968,” said Knight, “This looked more like the rioting of 1967.” Knight closed his column with praise for the Tigers, but boos for the conduct of some Tigers fans. It was not good PR for the city of Detroit. I remember teaching at a rural high school south of Columbus, Ohio at the time. The next day at lunch, I was poked by a fellow teacher about how real Tigers fans in Detroit acted. I disagreed, but it was not easy to explain. I still relished a Tigers World Series Championship.

Fans in Gratiot County had plenty of access to collectibles and memories of a time that seemed to be a long time coming. If you walked into Arnolds in Alma’s outdoor mall, a long line of new Sports Illustrated issues were all strung out on the counter. SI dedicated its cover to Alan Trammell for his performance during the World Series and his MVP Award. Anyone who wanted to buy a World Series program, but who had not attended a single World Series game in Detroit,  soon found programs at different stores in the county. They were more than plentiful. Tigers 1984 baseball cards and Tigers team sets had been popular all summer. Collectors eventually figured out that Topps started larger than regular print runs of cards to meet an emerging, growing collectors market. Fleer followed suit, but Donruss cards seemed to be in shorter supply. Bumper stickers, banners, and shirts proved popular that fall, many reading “The Roar of ‘84” in Tigers blue and orange colors. Because of that October, Tigers memorabilia would have a steady consumer market in Michigan for several seasons to come.

We loved the ’84 team, and Detroit Tigers championships seem to come about once each generation if we are lucky. Regardless of the wrong images after Game Five or the easy availability of Tigers collectibles, Gratiot County appreciated and remembered what happened thirty-five years ago today. And it has not happened since that day in October 1984.

And so we continue to remember 1984 in Gratiot County and say, “Bless You Boys.”