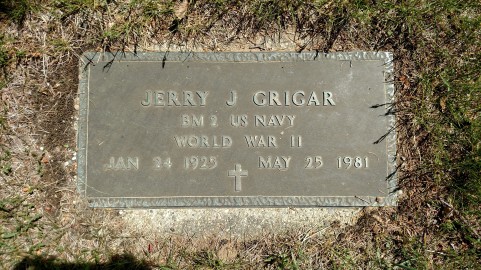 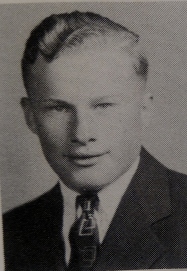 Jerry J. Grigar was born January 24, 1925 to Thomas and Elizabeth Grigar. Jerry graduated from Fulton High School in 1943. His graduating motto was : “Studies are important but keeping up my social life in Bannister is more important.” He participated in FFA, boxing and football while in high school. On his eighteenth birthday he registered with the local draft board because of the war. His address was RFD No. 2, Ithaca. On June 17, 1943 Jerry was selected for the United States Navy and reported to the U.S. Naval Station at Great Lakes, Illinois. After the war he married Wanda Traver, became a farmer and together they raised four children. Jerry  passed away on May 25, 1981 as a result of a farming accident. Jerry J. Grigar is one of many Gratiot County men and women who served their county, state and nation during a time of war. He rests in North Star Cemetery.