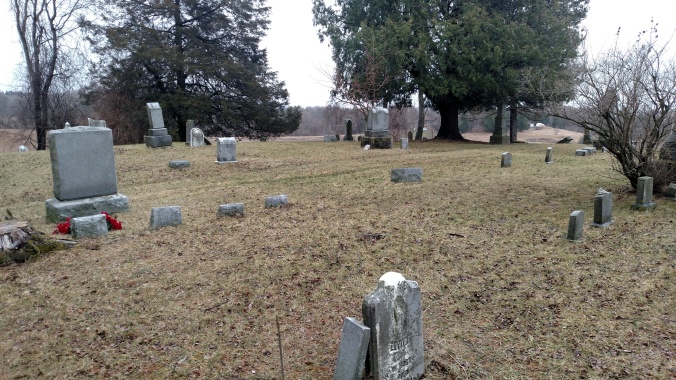 Above: Seville Township’s Brady Cemetery as it appears today

In early February, 1906, S. B. Abbott of Seville Township discovered that there were ghouls in Seville Township’s Brady Cemetery. Abbott made the trek up the small hill which the cemetery sat on one day that winter. He then made a shocking discovery: one of the graves had been opened. Human bones and pieces of underwear were strewn about. Someone, or some thing, had dug into the old casket in such a way that the interior could be clearly seen.

Abbott worked to return the bones and belongings to the twenty year old grave which belonged to one of Seville’s early pioneers.  He then filled it back in and  went to work to find the culpit. It did not take long.

It turned out that a badger, thought to be extinct in Gratiot County by that time, had managed to unearth and desecrate the grave. Abbot trapped the badger, which weighed twenty two pounds, cleaned it and displayed the jaws and teeth of the “ghoul” as conversation pieces.

He was also surprised to find that the badger had some other interesting contents. It had managed to swallow two gold rings which had probably been in the grave.

After learning that more badgers  were at work in other cemeteries in that part of Gratiot County, Abbott said that he hoped Michigan would put a bounty on them.

It is not clear what happened to the two gold rings.