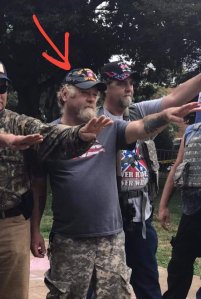 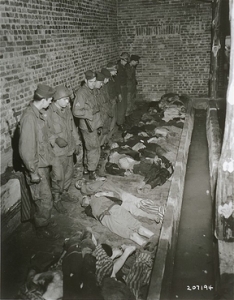 Above left: Image attributed to the Washington Post, August 16, 2017. The red arrow in the picture is not of my doing. Above right: Liberators from the 82nd Airborne and 8th US Infantry Division view the victims of the Nazis inside a building at Wobbelin, May, 1945. Photograph from United States Holocaust Memorial Museum.

It has been over a week since the protests in Chancellorsville, Virginia took place and I am glad that I just missed the events there. Still, I also remained bothered by what I continue to learn about this event in our country. One image attributed to Chancellorsville, in particular really bothers me. And it compels me to continue to teach, write and lecture.

I recently took a trip to nearby Staunton, Virginia to attend a teachers conference on President Woodrow Wilson, who served from 1914-1920.  Staunton, which sits west of Chancellorsville, is Wilson’s birthplace and the site of his library. I just dodged another tragic event in two years (last year at almost the same time I was in Nice, France 36 hours after the attack happened there on the French Riviera).

Last week, my google search notice went off in the morning when the words “Wobbelin 1945” popped up on my screen.

For fourteen years I have been researching, and recently just started writing about, a Nazi concentration camp that was liberated by the 82nd Airborne and 8th United States Infantry Regiment on May 2, 1945. Approximately 5,000 people went through Wobbelin, a satellite camp of KZ Neuengamme. At Wobbelin, the Nazi weapon of death was simple and crude: starvation. No gas stations or crematoria, just death by starvation.

When the liberators arrived at Wobbelin it was estimated that somewhere between 1,500 to 2,500 people from over 17 different nations had died of starvation at the hands of the Nazis in ten weeks.

Since 2003, when I became a Teacher Fellow with the United States Holocaust Memorial Museum, I have been working with a Holocaust memorial at Wobbelin. I also interviewed, met, wrote to and researched dozens and dozens of men and women who saw the Wobbelin camp in 1945. In the process, I was able to find at least four men from Gratiot County who served with the 82nd and who were in the region of where the Wobbelin camp was located. The late John Muneio, who lived in St. Louis, told me how he remembered personally confronting Germans after liberating the camp who came up to him and complained that the survivors of the Wobbelin camp were being fed and helped by the Airborne. Muneio loudly and bluntly told them, “SO?” I took the meaning to be, “SO WHAT, you didn’t give a rip about helping these people – get out of here.”

What struck me most was how indelibly the images from 1945 still were with these veterans. Dead bodies. Emaciated survivors – the “walking dead” as some called them. The stench of decaying bodies and the camp itself. These were some of the images that the liberators had decades later about what they witnessed at Wobbelin. Most of all, there were memories of those Germans who lived around Wobbelin and who claimed that they knew nothing about the camp and that they had no idea of what was going on there.

Both the 82nd and the 8th made sure that after the camp was discovered, Germans were going to remember what happened there.   German civilians, young and old, men, women, soldiers, Hitler Youth – any German that was found near Wobbelin – was made to take “a tour” of the camp. Nazi Party members were rounded up and made to carefully excavate corpses from burial pits (with their bare hands) for public funerals that were held in at least four locations. One liberator, Leonard Linton, oversaw the excavation of the pits and reminded those in charge of removing the bodies that they would not be using gloves, “So that you (Germans) will never forget what happened here.” The confrontation with the camp and the funeral was to remind these Germans in 1945 of what the Nazis did and what they, as citizens, had allowed to happen in their own midst.

What does this have to do with Chancellorsville?

The Google notice from “Wobbelin 1945”  that I saw featured a picture from the events at Chancellorsville from a story from the Washington Post dated August 16. It was from an article by Cleve R. Wootson, Jr. In it was a picture of what appears to be a man giving a KKK salute while wearing, of all things, a hat from the 82nd Airborne. The irony of attending a KKK/neo-Nazi rally while representing anything to do with the 82nd Airborne was appalling and shocking.

I had several gut reactions to the Chancellorsville photograph.  “This guy needs his head examined.” “Ignorance is bliss.” “Those who don’t know their own history are doomed to repeat it.” “This stuff needs to stop right here.”

This is what the 82nd Airborne fought for in 1945?  Does this guy in the photograph have any idea of what Nazism ultimately led to?  My grandfather, who was not a member of the 82nd Airborne but who served in Italy, fought against the same enemy. What would he think of the image? This “protestor” needs to go back to Wobbelin and take a look at what the end of Nazism, hate, prejudice, and discrimination ultimately lead to.

He also needs to spend some time learning about the Holocaust and American history – and about the 82nd Airborne. And this is why we educate people.

Maybe I should tell this guy in the photograph that he just gave me the impetus to pick up a recently started manuscript on a book on Wobbelin and that I need to get going with it again.

A year ago I was scheduled to talk to a local historical society about the Ku Klux Klan in Gratiot County during the 1920s. Talk about timing.

One thought on ““In Gratiot County, I am Bothered by Chancellorsville” – August, 2017”