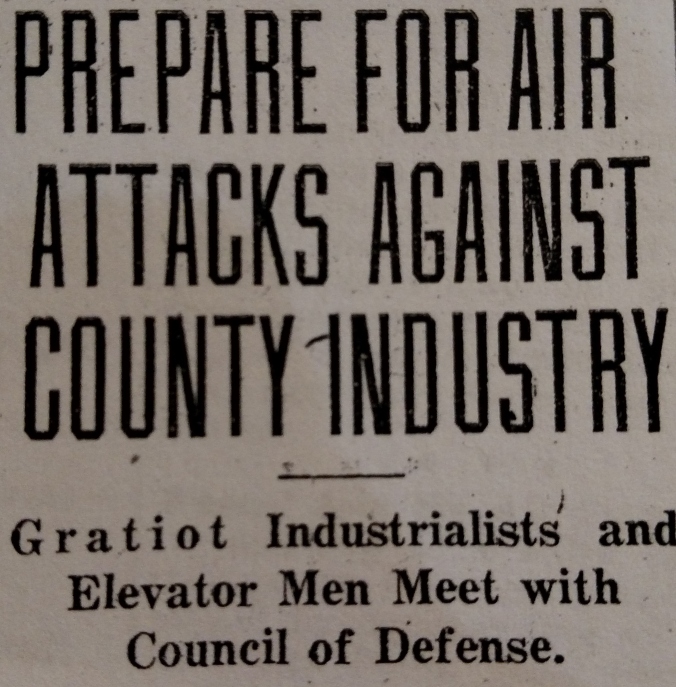 Above: Headlines from the Alma Record and Gratiot County Herald, early 1942.

As Gratiot County recovered from the shocking attack on Pearl Harbor the county started to stand up against the Axis Powers. Plans and directions soon came into place about what to do in anticipation of a possible war on Gratiot County’s soil. One of these plans involved anticipating air raids. Because of this, Gratiot County’s Air Raid Warden Plan was born.

One of the first things that Gratiot County residents were asked to do involved helping the Navy by building miniature air planes. The Navy needed 500,000 solid scale airplanes for training for air craft recognition and gunnery sitting practice. Built on a scale of 1:72, these planes when viewed from a standard ring sight at a distance of 35 feet simulated a plane approaching from half a mile away. Training pilots were able to use them to learn an enemy plane’s identification and its range. The airplanes also could be used to train civilian enemy spotters, just as the British citizens had been doing since the war started.  In all, Gratiot County was called upon to contribute 50 airplanes for the project.

In early April, the American Legion announced that it was hoping to turn out 1,000 qualified air wardens in Michigan within thirty days. South-central Michigan was especially important for potential air raids due to the location of many industrial plants. At the time, Michigan was third in the nation in turning out war munitions. It was believed that enemy bombers could rendezvous over central Michigan and then proceed over main highways to their targets downstate.

As this was taking place, leaders of county industrial plants and grain elevators met in Alma’s city hall to discuss how to prepare for enemy bombing raids, handling incendiary devices, and sabotage. Places like the Michigan Chemical plant in St. Louis were of special concern. Twenty leaders came to the meeting and learned that each would have to be responsible for defending their own factory or elevator from attacks. However, first aid would be supplied from citizens groups in the county in the aftermath of a bombing.

Initial training took place over six ten hour days at Michigan State College. From here, instructors would go back to their own counties to set up their own groups of county air raid wardens. Once air raid training began, citizens quickly volunteered to defend Gratiot County.  Among the first men to attend the training in Lansing included Richard D. Gay, Virgil Case, Cornelius VanVoorst, and Dutch Collins, all from Alma. St. Louis sent Louis Grice, Lawrence Bottum and Fred Himes.  Each completed the course and returned to Gratiot County to help teach another 75 wardens. The head of the overall Gratiot County air warden program was Earl Rhynard, commander of the Alma American Legion Hall.

The first air raid warden classes for county volunteers took place in Alma, Ithaca, and St. Louis. It was planned that Alma would have either twelve or thirteen air raid warden posts in Alma, with each post having a staff of six people. It also was intended that a special telephone line would be established in Gratiot County to allow all wardens to announce air raids.

On the first night of classes in St. Louis thirty people turned out, along with volunteers from Breckenridge. These students studied first aid instruction, espionage and sabotage control, incendiary bombs, gas types, blackouts, and how to protect schools. In Ithaca, C.P. Pressley started classes at the high school.  Soon, other people also took part in the training. Ralph Chisolm (Breckenridge), Don Curtis (Middleton), Ernest Arnold (Perrinton), Dan Pomeroy (Pompeii), Joe Liska, Jr. (Ashley), and William Ferris (Bannister) also took the classes in order to set up programs in their own towns. Near the end of the training, public demonstrations from the classes took place in several towns to demonstrate how to put out incendiary bombs. In Alma, a demonstration took place on a Friday night in the city parking lot on East Superior Street.  At another location in Ithaca, a group of air raid wardens took a sample incendiary bomb, ignited it, and then put it out with sand and gravel.

Classes continued to gain volunteers and by the time school got out that summer, Gratiot County had nearly met its quota of 100 air raid wardens. The American Legion in Alma put on a banquet for the volunteers who completed the classes.  The first group included 82 graduates. Another 18 who joined the classes after they had started completed their work by early summer. Each member who completed the course was awarded an air raid warden certificate; later they were given their own arm bands.

Some of the first air raid warden posts to operate were located at Alma College, the Alma Masonic Home, the Michigan Sugar Company, Alma Trailer Company and in villages such as Elwell and Riverdale.  As 1942 went on, posts could be found in every town and village in Gratiot County. These wardens played an important part in Gratiot County during World War II by watching the skies for the enemy and keeping the public safe.