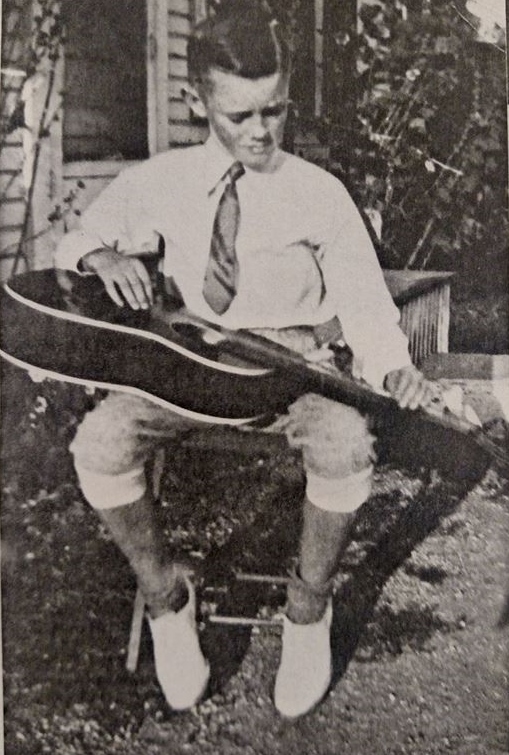 Above: D.C. Furgason, somewhere in the Mediterranean Theater; on the day he left for the service on March 25, 1943; as a young boy at Furgason’s Store, east of Ithaca.

I was standing in a cemetery in Nettuno, Italy when I was struck with the loss of American life at a place in 1944 called the Anzio Beach Head. The Sicily-Rome Cemetery is one of many operated under the care of the American Battle Monuments Commission. The job of ABMC is to care for the graves of men and women who died in service to the United States and who remain buried overseas.  Unfortunately, for many of these men and women they are threatened with being forgotten.

During July, 2016, I was with a group of teachers who traveled under a program called “Understanding Sacrifice” that was sponsored by the American Battle Monuments Commission and National History Day. For almost one school year each of us researched one American who died during World War II and who was buried in one of four cemeteries in either North Africa, Italy or Southeast France. The man I chose, Raymond Wittbrodt from Flint, Michigan, was buried in the Sicily-Rome Cemetery. Although I was able to track down some of his family, found his grave and wrote a  biography about him and his unit (Wittbrodt served with 1st Special Service Forces), I was unable to figure out exactly where or when he died. There was much about him that remained unknown and unsolved even though he died somewhere on the Anzio Beach Head.

My maternal grandfather had also been at Anzio, albeit as one who worked on the Beach Head as an engineer. When I returned to my hotel in Rome on that night in July I was actually angry that I had been unable to learn about Wittbrodt’s death. Up until that night I really had not seriously thought about the first Ithaca man who also died there: David Chauncy Furgason, Jr. Although I carried the story with me during that year of research, I really had not given him serious research.

By using the information that I had with me in the hotel I was actually able to locate some of his family through Ancestry.com. With some luck, I actually talked to one of them that night from my hotel in Rome. What I learned encouraged me to set up a visit with them when I returned home in August.

Prior to all of this, I first learned about D.C. from one of his classmates, Mrs. Lois Barden, who graduated with him in the Ithaca High School Class of 1941. She remembered a small, thin boy who had reddish hair. She also remembered Furgason’s Store which was operated by his parents just east of Ithaca, along the curving road that came into town. Lois was also the first to tell me that D.C. tragically had an early premonition that his life would be shortlived. Indeed, D.C. was killed somewhere on the Anzio Beach Head.

Now, if you want a biography of D.C. Furgason, you need to pick up the November 8 issue of the Gratiot County Herald.

When I met in August 2016 with D.C.’s niece, Carolyn, she added to my knowledge of this young man who was talented, young, and likable. He was a gifted poet and writer. And on January 27, 1944, he was gone.

It was Furgason’s death and his return to Gratiot County that told me even more about him. Only eight days before he died he mailed his last letter home to his parents. He had also spent only five days in combat. On March 13, 1944, he was awarded the Purple Heart (which I got to see). Also, a memorial service that month was held in Wheeler where 200 people attended the service for four area men who had recently been killed in the war.

Furgason’s Individual Deceased Personnel File (IDPF) told a familiar story about how some of Gratiot County’s dead from World War II made their way back home. It was hard for families. It took time. Laying these men to rest in the county reopened old wounds and renewed grief.

Initially, Furgason was buried in Plot B, Row 9, Grave #252 in the Sicily-Rome Cemetery.  About two months after his death, his father wrote to have his few belongings sent back home. It was July 1944 before nine of these things arrived in Ithaca. The family was also given the remaining money that D.C. had with him at the time: a total of $11.36. In 1947, the Furgason family was sent a picture of the newly constructed cemetery at Nettuno.

Within two years of the end of the war, American families were given the chance to have their loved one sent home for burial. The Furgasons did not hesitate as they wanted their son to rest in Gratiot County. The initial process of bringing D.C. home started in late March 1948 with a request from the Furgasons to have him disinterred. On August 10, 1948, Train #51 from the Ann Arbor Railroad arrived in Ithaca. Three days later, on a Sunday afternoon, a funeral service was held for D.C. Furgason at the Sowers Methodist Church. Afterward, he was laid to rest in Breckenridge’s Ridge Lawn Cemetery. Reverend Don Warmouth, who met D.C. in Italy a short time before he died, helped to officiate the funeral.

D.C. Furgason was one of 130 Gratiot County men from World War II who paid the ultimate price for the freedoms we have today. Each of these men is a story. On Veterans Day we owe them, as well as our many living veterans in Gratiot County, as debt of thanks for their service.