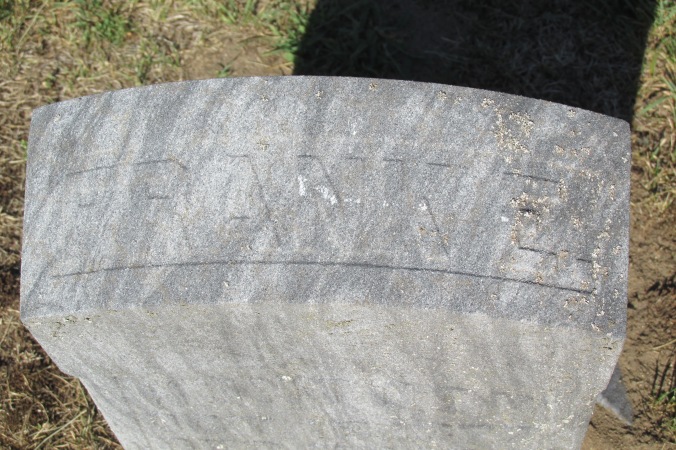 Gratiot County’s first man to die in the Great War was one of several who sadly never made it to the Western Front.  This story, like a few others that will be told, is best viewed as the result of misfortune or accident.

Frank E. Huntoon was born October 18, 1877, to Adelbert and Melissa Huntoon in Bridgeville, a small village located at the southern end of Gratiot County. Frank was the middle child of at least three children (George, Frank, and Mattie). By 1880 the family was living on a farm in Emerson Township.

Little is known about Huntoon, although he must have joined the military and served in it for several years prior to the war. In 1910, he was a member of the 8th United States Infantry at the Presidio of Monterrey in Monterrey, California. There is no evidence that he ever married or had children, so it is very possible that Frank E. Huntoon spent at least some of his life earlier in the United States Army.  However, in 1917 he again enlisted in the Army to serve his country.

Huntoon was just short of forty years of age on August 1, 1917, when he found himself stationed at Fort Benjamin Harrison. By winter there were an estimated 7300 troops of the 10th Infantry Regiment at the camp. Frank E. Huntoon was one of these men.

The winter of 1917-18 was extremely cold and harsh and had enormous amounts of snowfall. Soldiers at camps like Fort Harrison found themselves literally snowed in, confining them to the base. The Army tried to keep them busy there with their duties.  In short, life for Huntoon could have been very boring.  It was here that fate met him on December 28, 1917.

Records and clues as to the cause of Huntoon’s death are scarce. One states that Huntoon “Worked at (the) Barber trade, and was in that service when he died.” Upon his death, his commanding officer, Lieutenant Henry G. Sebastine, wrote to Huntoon’s mother, “Private Frank Huntoon was an excellent soldier who was universally liked by his officers and his unfortunate death is a source of genuine sorrow to us all.”

But what led to Frank E. Huntoon’s death? The only record left in the National Archives reads, “Died Dec. 28, 1917, at Ft. Benj. Harrison, Ind.  of wood alcohol poisoning.” Is it possible that Huntoon tried to relieve his boredom with some poorly made alcohol on the base? Was someone selling bad alcohol and Huntoon was a victim? Another answer to the cause of Huntoon’s death is a clipping from the St. Louis Leader which was printed after his funeral. It read that he was “taking ill with ptomaine poisoning, which was the cause of his death.”  This suggests that he contracted bad food at the camp.

Regardless, there is more to Huntoon’s story after he died. Upon notification of her son’s death, Melissa Huntoon was told that the only way that she could get her son’s body returned to her in St. Louis was to pay $75 to a funeral company in Indianapolis, Indiana. Melissa, who had little money, somehow scraped together the required sum and forwarded it to the Flanner and Buchanan Funeral Home and the body was shipped home. And then things came to a boil after she talked to other soldiers who were home on furlough in St. Louis.

Mrs. Huntoon soon learned that grieving mothers or widows could be entitled to insurance policies that soldiers took out in the event of their deaths. She also learned that the United States Army did not charge families money to have their sons or husbands sent home for burial. Upon writing to the Quartermaster General she stated, “We have buried (Frank) at our own expense and we are poor and if there is such a thing it would seem acceptable to us (to be compensated for the cost)…It seems though Uncle Sam ought to have paid my boy’s expenses home. He gave his life and now not one bit of help from him.”

An Army investigation was quickly launched regarding Melissa Huntoon’s letter.  The entire affair also somehow made it into newspapers, apparently in Indiana, and writers there accused the funeral home of extortion. Within a few short weeks it appeared that Mrs. Huntoon received her money back, all as what the funeral home and Army would call “a misunderstanding.” Years afterward, the Army conducted another investigation to make sure that Melissa Huntoon had indeed been properly compensated.

She had been paid, but she lost Gratiot County’s first man in the Great War.