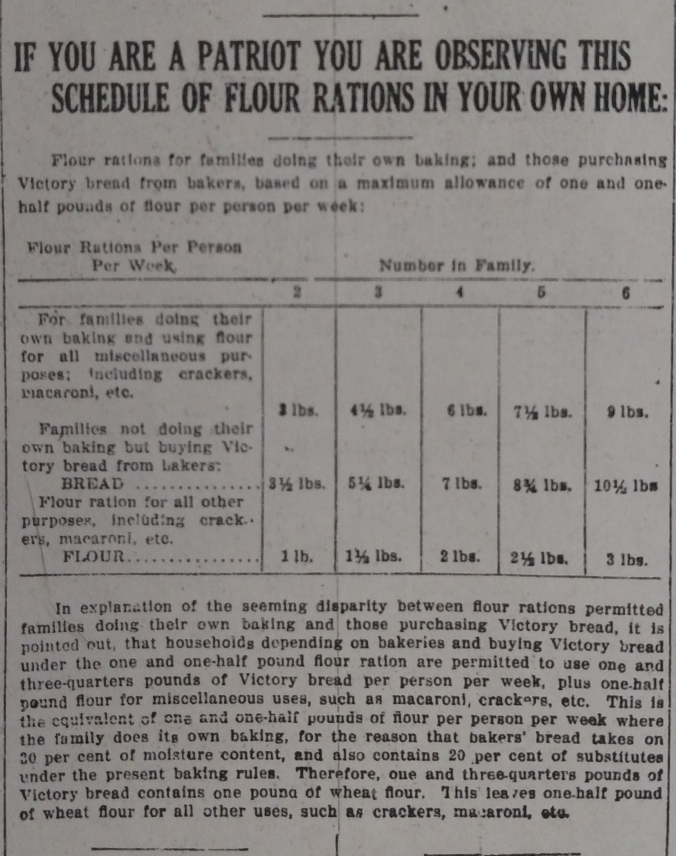 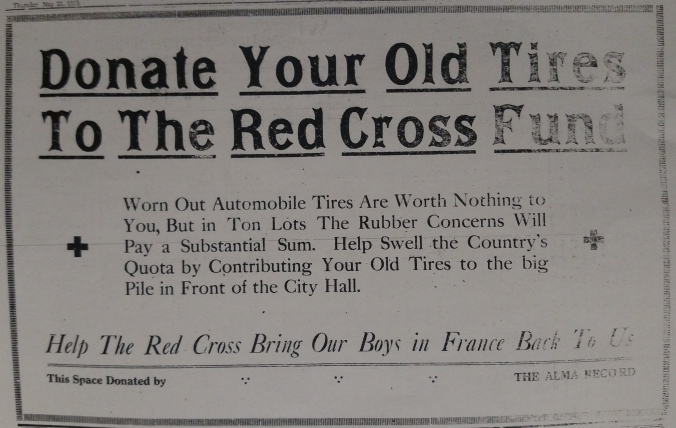 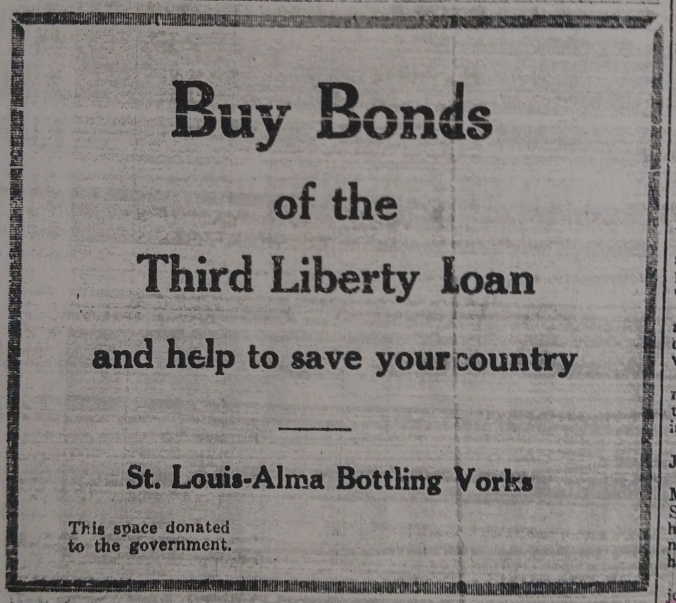 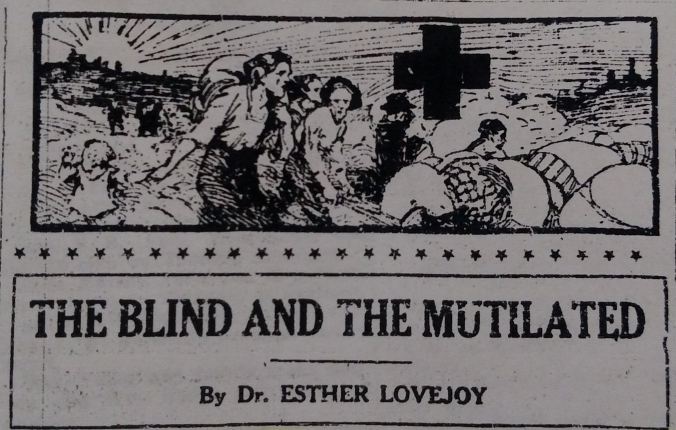 Above: Advertisements and headlines from the Alma Record and Gratiot  County Herald during May 1918.

The war was on and life continued in Gratiot County during  May 1918.

On top of Alma’s City Hall, one could see a Third Liberty Loan flag that Michigan Governor Albert Sleeper sent to Alma to congratulate the city for its efforts during the recent bond drive. Advertisements by businesses, like the St. Louis Alma Bottling Works, urged readers to buy a bond to “help to save the country.”  Governor Sleeper also moved to make one thousand new tractors available to farmers in Michigan who could use them and afford to pay for them. Ensuring supplies of seed corn and spring wheat for farming was also one of the governor’s goals. Army officers who were in need of financial assistance to purchase their equipment to attend the training camp at Fort Custer could receive up to $400 in loans, but it had to be paid back after the war.   The Yerrington Band played in St. Louis at the opera house for meetings to raise Liberty Loan money. The Alma Record gave service buttons to family members of men who had gone to France. The buttons were red, white and blue with a star in the center to represent the soldier. Some buttons had two stars to represent a family who had two soldiers on the front.  There were more serious concerns in the county. Alma schools announced that it was dropping the study of German after the current school year. Instead, French would be taught in its place.

The use and consumption of American wheat were deemed as one of the important factors in defeating the Kaiser because the boys on the front needed to be fed. The government even reported that some places in the South and West had committed to not eating wheat bread until after the summer harvest. An article from County Food Administrator C.J. Chambers said that “THE AMERICAN PEOPLE MUST MEET THE TEST” and Gratiot County was urged to do the same. He asked, would Gratiot County also make this commitment? Families were supposed to eliminate the use of wheat until the next harvest, which would be a challenging task. Those who had to use wheat were told to confine their use to 1 ½ pounds per week. In Alma, no more than 1/8 of a barrel of flour could be sold at a time to one householder. One advertisement in the Alma Record showed how families should ration flour based on the number of people in their home. It read, “IF YOU ARE A PATRIOT YOU ARE OBSERVING THIS SCHEDULE OF FLOUR RATIONS IN YOUR OWN HOME.”  Warnings were issued that the National Food Administration would punish flour hoarders. People were told that no one should have more than a thirty day supply of flour on hand at any time. Sugar seemed to be another concern but women were told that they would have enough for the upcoming canning season.

There was a constant call to support Gratiot County’s men at war. In early May, one of the first articles appeared that warned people about the dangers that soldiers faced from poison gas attacks. Doctor Esther Lovejoy, a physician, and public health advocate warned readers of the long-term effects of those who were blinded as well as those who would have to have artificial limbs and plastic surgery. So far, most people in Gratiot County had yet to see a wounded soldier in their midst, but that time was coming.  The United States Navy continued to recruit men in the county and held a patriotic meeting at the Alma Methodist Church. The Navy needed a half million men for its ranks. Seven men from Alma and Alma College received commissions as second lieutenants at Camp Custer. Among them was William C. Searle of Ithaca who was the son of Judge Kelly Searle. He was also the grandson of Alma founder Ralph Ely. On May 25, 61 men were called for military duty and had to appear before the draft board. To meet this requirement the draft board would now take men who had married in the last year and those who had previously been deferred. Also, 21-year-olds as of June 21, 1917, now had to register at the office above the Wright furniture store on Superior Street. None of the men in these groups were supposed to be excused for any cause.

Another call went out about the need to support the Red Cross and it confronted those who failed to do so. A county Red Cross drive took place in the hope of raising $25,000, with each township having an assigned amount to raise. The Alma Chapter lamented that while there had been a city-wide parade at the end of the month, enthusiastic support seemed lacking. Some thought that Alma college students were needed to get involved in order to wake the city up. Similar calls for patriotic support with the Red Cross went on in other locations in Gratiot County. Over in Newark Township the question was asked, “We wonder what is the matter with the south part of the township, are you working in some other chapter, if not come and help us, we need you.” One lady walked four miles and another three miles just to work with the Red Cross unit there. Students at area schools were also asked if they had things that they could donate such as old gold rings or silver hat pins for “melting pots” (scrap metal that could be used for the war effort). The Red Cross also asked people to donate their old automobile tires. In Alma, donors could place their old tires on the bandstand that sat in front of city hall.

As these things went on, more and more letters appeared from France. Private Earl Christy wrote to his brother that he had received a warm welcome in France and that there were 6,000 men on his ship when it arrived there. He commented, “Wouldn’t that have been a lovely bunch for some German submarines had they had a chance (to attack us), but, thanks to the Jackies who escorted us across.” He thought the YMCA and Red Cross were a great help to boys in the Army. Merlin Hamilton wrote to his parents that “A letter over here is a rare treat.” He did not mind that his letters home were tardy because each letter was believed to be censored at least twice. When he went into a French store he said that all he had to do was point to anything he wanted to buy and the shopkeeper would hold up a coin to show how much the item cost. His French had improved considerably and he could barter on his own. Lyle Reed told his wife that his French was very hard to learn but he knew enough to buy goods. He also was driving a three-ton Packard truck each day in order to deliver supplies. His biggest challenge was that in the city of 100,000 where he was at the streets were narrow and people walked right in the center. Lester Brandal was with the 20th Engineers and spent his time working in the woods cutting logs. Writing to his sister, Leo Sheridan asked the family to look out for copies of May’s issue of McClure’s, Woman’s Home Companion or the Saturday Evening Post as he had his picture taken while visiting a YMCA building. He also closed by saying that he looked forward to returning home “so you can prepare one peck of German fried potatoes, a can of macaroni and cheese and Johnnie cake with all the trimmings.” One letter from Fred Crawford, Jr. to his aunt and uncle, Mrs. and Mrs. J.B. Crawford of Ithaca told of fighting on the front. He thought the dugouts were better than he expected and although he was in a quiet sector, he and other men watched airplane battles that went on above. Crawford likened the event to watching a football game. He recalled being shelled near Verdun, “I wish I could describe how I felt the first time we were bombarded. The feeling was a brand new one, and it was similar each time afterward, although of course, not so tense. The best description I can think of is the highest possible tension of the nerves, so that every fiber in you is on edge and especially when are outside. Every sense you have is so alert that you don’t have time to be afraid.” Sometimes Crawford was up from 24 to 36 hours at a stretch and he believed he could tell where a shell was going based on the whistle it made.

More stories of combat in France would be coming to Gratiot County as some of the bloodiest battles were yet to begin.