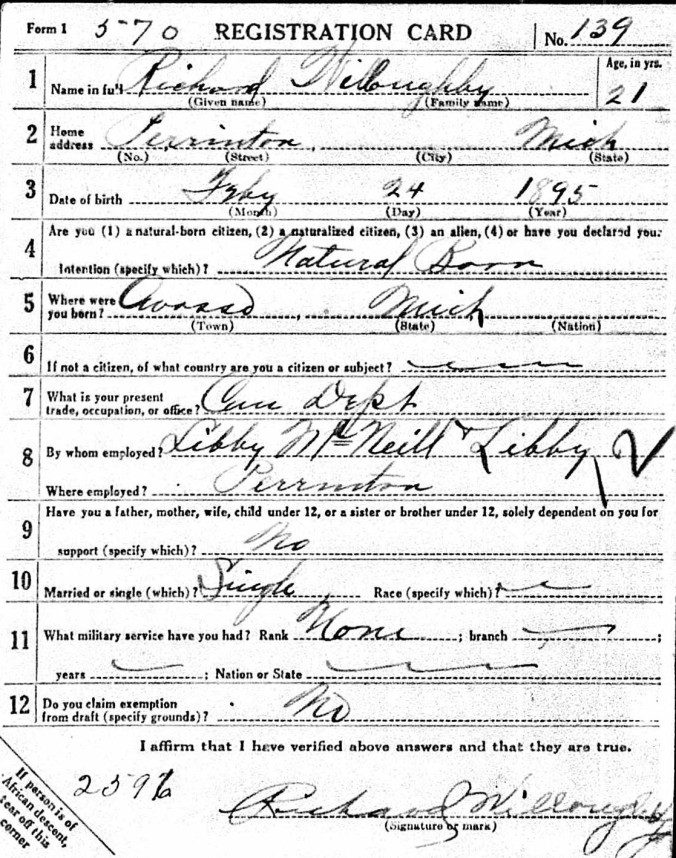 Above: The marker of Richard N. Willoughby which is in Fulton Center Cemetery in Fulton Township; Willoughby’s 1917 draft registration card.

He had a mother who desperately wanted to know how he died, where his belongings were and when his body would be brought home. It took over two years, however, Richard Willoughby eventually made his way home after dying for Gratiot County in the Great War.

Richard N. Willoughby was the youngest of three children; he was born February 24, 1895 to William and Anna Willoughby. In 1900, he was listed as living with his family in Owosso where his father was a farm laborer. By 1910, when Willoughby was only 15 years old, he lived with his aunt and uncle. Something around this time happened in the family: possibly his father died, his mother remarried, and the family may then have moved to Perrinton.

Richard grew up to be a tall, young man who had blue eyes and light colored hair. He also worked in the office for Libby, McNeill & Libby of Perrinton as a time keeper. It appears that Willoughby enlisted in the Army on June 5, 1917 and was sent to Columbus Barracks, then to Syracuse, New York and in the process he became a Private in Company I of the 23rd Infantry. Not much was said or written about Willoughby’s service in the local newspapers. Only one, the Alma Record, noted in late September 1918 that “there is a strong probability that (Willoughby) is a prisoner in the hands of the Hun. It is also possible that he has paid in full his debt to this country, by giving his life in aiding to promote its success.” It ended up that the Alma Record was correct on the second part of its statement.

In reality, Willoughby had been killed in action on July 19, 1918 when he was hit and immediately killed by shrapnel that shattered his head and his left arm. Private Guiseppi Guarino of Cambridge, Massachusetts was a witness to the incident. Willoughby was given a chaplin’s funeral in Ploisy Aisne Cemetery, near the spot where he fell. Back home, his mother, Mrs. Anna Herrick, heard nothing other than the news that her son was dead. For almost two years she did not know where her son died, what actually happened to him, where he was buried or where his belongings went.

In November 1920 Mrs. Herrick wrote to her Congressman asking for answers to these questions. She eventually filled out a request for his removal and final burial at home, but she also wanted to know when he was coming home and how he died. In January 1921 some of her questions were answered when the government notified her that that the remains of her son were finally being sent home. Mrs. Herrick was adamant that her son be sent to Perrinton for internment. In early May 1921 she was told that her son would arrive on May 13, accompanied by Private Robert F. Coles, an attendant with the 28th Infantry. Willoughby had first been placed on the USAT Somme, then once he arrived in Hoboken, New Jersey, he was ultimately placed on the Grand Trunk Railroad.

Once Richard Willoughby returned to Perrinton, Michigan he came home with only two things: a ring with the letter “R” stamped on it and his serial number (51,464), which no one back home seemed to know. Willoughby did, however, leave a legacy in southern Gratiot County. In 1921, he and another fallen soldier from Perrinton in the World War (Lyle Smith) had the American Legion Hall named after them in Perrinton. Today, a marker is all that exists for the sacrifice that Richard N. Willoughby made for Gratiot County. Richard Willoughby was only 23 years old when he died in the Great War.