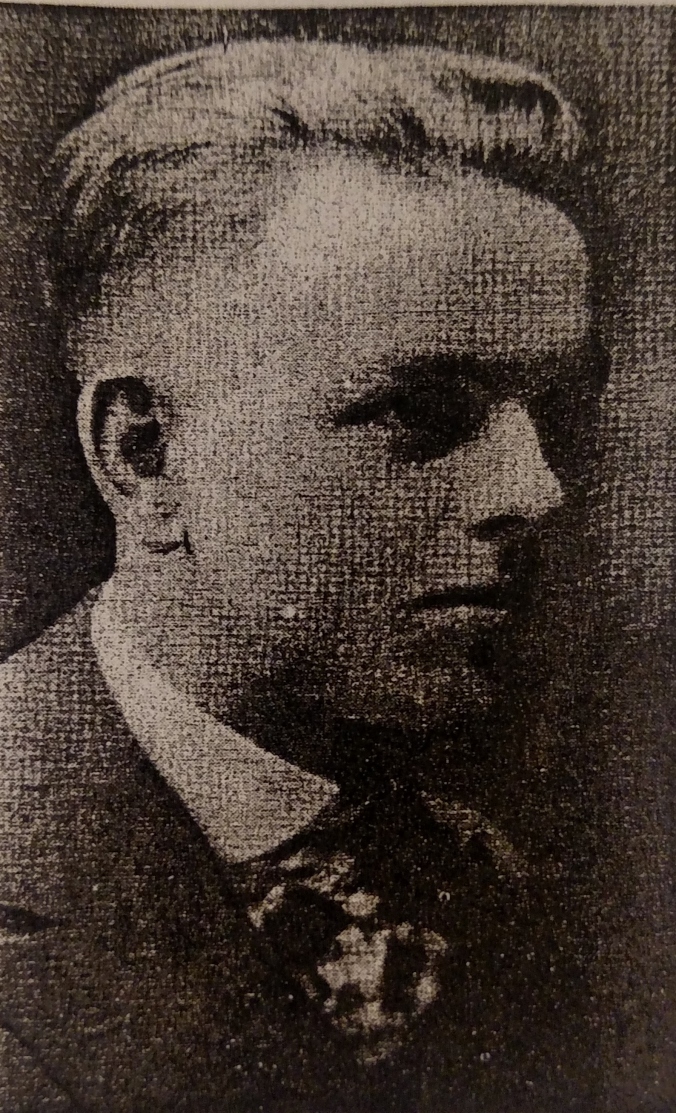 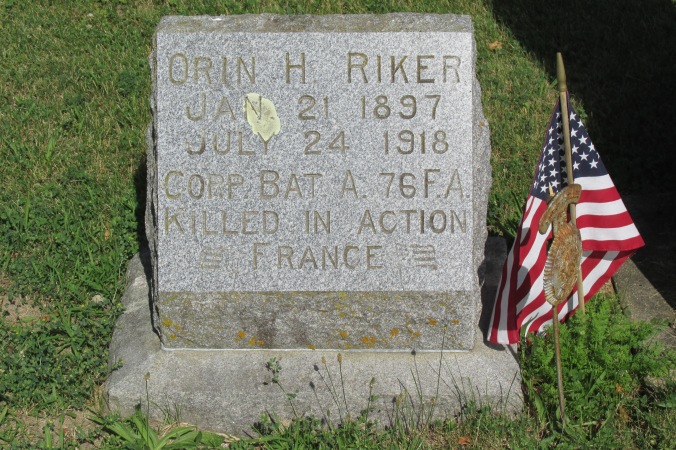 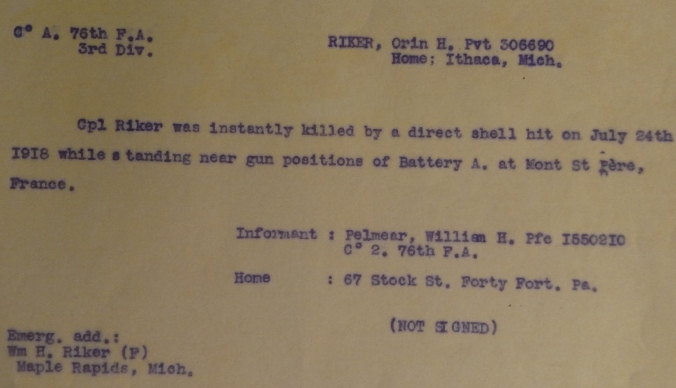 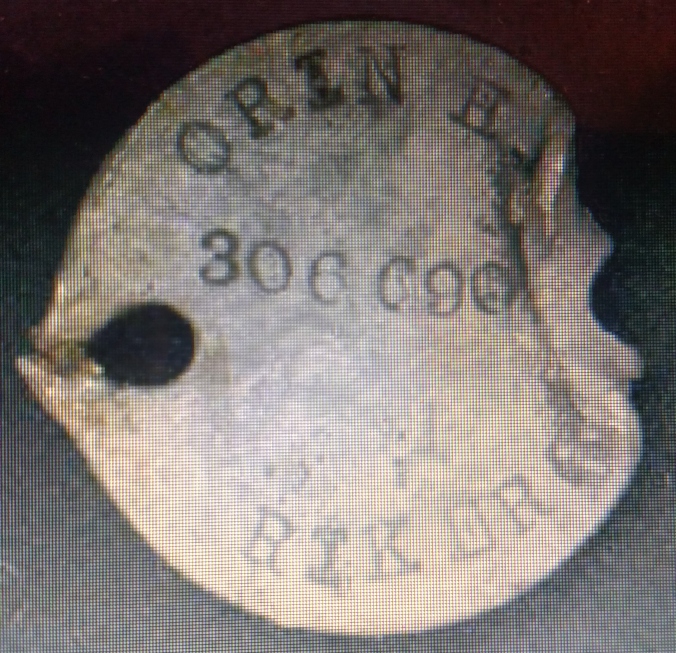 Above: Portrait of Orrin Riker taken before summer 1917; Riker’s marker in Clinton County; testimony of how Riker died in July 1918; Riker’s identification tag.

On July 4, 1918, an Ithaca soldier who had recently completed his training wrote to an Ithaca family and asked about his friend. “Where is Riker? Did he make it across?” The soldier wanted to know what happened to his buddy, Orrin Riker, and if he had made it over to Europe or not. Three weeks later the Army announced that Orrin Riker had been killed in action in France. He was the first enlisted man to die from Ithaca.

Orrin Hudson Riker was born to William and Lilian Riker in Maple Rapids, Michigan on January 21, 1897. Orrin was one of four children and his childhood was largely spent in Maple Rapids, except for a brief time on farms in Ovid and Essex townships. Up until the age of five, he went to school in the Grove District school. Afterward, he attended high school in Maple Rapids. Starting in the fall of 1913, Riker learned the trade of printing at E.B. Pilkington’s Dispatch office.  He soon moved to The Ashley World and the Middleton Record, then he spent three years at the Gratiot County Herald where he was the night linotype operator.

Once the United States declared war against Germany Riker was among the first to join up.  On May 6, 1917, Orrin enlisted in Alma and was soon headed for Grand Rapids.  His records show that he was 5’ 9 ½” tall, had gray eyes, brown hair and weighed 139 pounds. From there he went to Columbus Barracks, Ohio and Fort Ethan Allen in Vermont. In the process, Orrin Riker was made a member of Troop A of the 18th Cavalry.  From Vermont, Orrin wrote one of his letters home to his parents. He had just received a box of gifts from a group of employees at the Herald and the letter was dated October 2, 1917. Riker mentioned that he had been placed in a field artillery formation that was practicing canon drills. The caissons that he saw each had a gun and each caisson was drawn by three teams of horses, which required certain skills to drive the team. It was also interesting to him that the guns he saw were used by General Pershing in Mexico and that they had seen action there.  Riker commented that he had been made a corporal “a while back and since then my life has been a misery. You have responsibilities you never dream of… I am no quitter and I am coming fine.”  Map reading interested Riker and he felt that his work as a printer helped prepare him for it. He did lament the weekly “maneuvers” that his group had to do, which once meant an overnight hike of 35 miles. Records show that Riker was then sent to Camp Shelby, Mississippi on December 1, 1917, and that he was transferred to Company A of the 76th Field Artillery. On February 15, 1918, he went overseas to France.

Tragedy met Corporal Riker on July 24, 1918, when he was instantly killed while standing around the gun positions of the 76th near Fismes, France. Apparently, Riker had been on his way to a listening post when he paused at that spot. It was then that a direct shell hit him in the head, shattering his lower jaw. To many who heard of where he died,  Fismes was a part of what was called the Second Battle of the Marne.  Riker was initially buried near where he fell and he was moved again until he was buried at an American cemetery near the town of Seringes. Here Riker was placed in a grave with one of his identification tags placed on his marker and another on his body.  Back in Maple Rapids, a memorial service was held in his honor in October at the Maple Rapids Christian Church.  No one knew then, however, it would be almost three years before Orrin Riker found his way back home.

Riker ’s mother was like many other American mothers who wished that her son would be returned home for a final burial. It was not until April 1921 that the Army told Mrs. Riker that her son’s body would be returned. The following month the body was disinterred and boxed; in late July it was sent aboard the SS Wheaton with a group of twenty other Michigan men. Breckenridge’s Howard Wolverton, who died in July 1918, was also part of this group coming home. On August 4, 1921, a telegram arrived at the Riker home stating that Orrin Riker would be arriving at St. Johns. His final resting place was at Sowle Cemetery in Essex Township, Clinton County. An estimated 70 soldiers and sailors from Clinton and Gratiot counties attended the service.

Orrin Riker was one of few men from Gratiot County who were also claimed by other counties. When Riker death was announced in July 1918, the Gratiot County Herald paid special tribute to him and placed a gold star for him on the newspaper’s service flag. After the war, he also was the only Ithaca man to die in combat and the town recognized him as such. In February 1920, well before Riker’s body returned home, a group of fifty men met at the Ithaca armory and formed the Orin H. Riker American Legion Post Number 237. The Post in Ithaca remains active and carries his name  (along with World War soldier D.C. Furgason) to this day.

Yes, in response to an Ithaca soldier’s question in the summer of 1918, people after the World War now knew where Orrin Riker was.  He “had made it across” to France, he was killed in action but he had finally made it back home.

Orrin Hudson Riker was only twenty-one years old when he died during World War I.