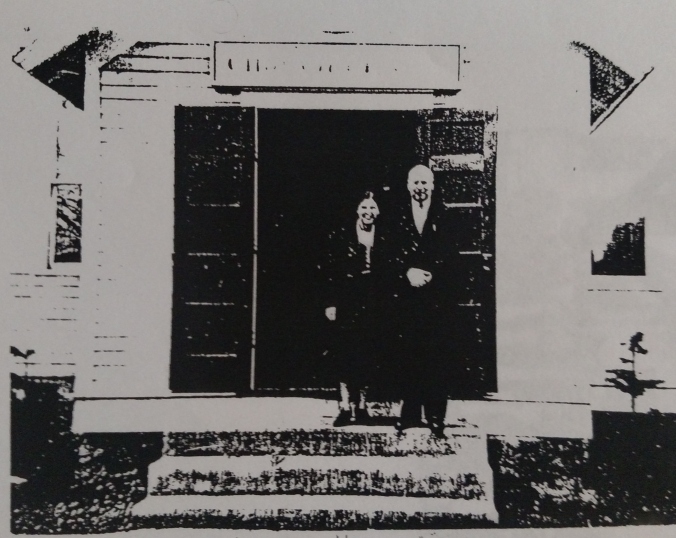 Above: Pastor and Mrs. R.T. Page pastored the church for approximately two years during World War II; Reverend B.C. Van Every had a successful pastorate from 1944-1950.

While the Ithaca Church of God had taken root in the community, it now saw a period of new leadership. After Reverend Lewis resigned,  it was hoped that the church would start its next stage of growth in the community.

The church called Reverend R.T. Page in 1943 to succeed Lewis. Not much is known about Reverend Page and his wife, except that they were only in Ithaca for a short time. The prime reason for this was that Mrs. Page’s health declined and they decided to move to a western state. They were pastors for less than two years and on September 24, 1944, they had their farewell service. At their last service, the Pages told the church that they were grateful for the new friends that they made, the memories they had in the short time they were in Ithaca, and the hope that would all meet again.

Starting October 15, 1944, the church welcomed its next minister, Reverend B.C. Van Every from Cadillac, Michigan. He was a unanimous choice by the congregation and had been at Cadillac for eight years. Van Every was 35 years old, and he and his wife Arietta came with their three-year-old daughter. Van Every had filled the pulpit in Ithaca several times before his call, so many knew him. Van Every turned out to be a very good speaker, had a deep commitment to evangelism and missions, and he worked well with other ministers and congregations by being able to preach to other denominations and churches with the same acceptance.   Early in his ministry, Van Every considered leaving the Ithaca for a call to the mission field and he even turned in his resignation.  It appeared again that a recently hired pastor was going to leave the Ithaca church, however, events happened and Van Every decided to stay.

As Reverend Van Every settled in at Ithaca, he became involved with organizations like the county’s Temperance Committee. He also built bridges in the Ithaca area with something that he owned, his camera. Whenever there certain events going on in town it seemed that Pastor Van Every was there taking pictures. On more than one occasion the local newspaper used Van Every’s photographs to go with a story, such as a tragic fire.  One of the things that the Van Every ministry would be remembered for was the building of the church’s new cinder block sanctuary and the continuing growth of the church. In April 1950, Reverend Van Every resigned from the church to answer a call to the Church of God at Otsego. However, he would return to Ithaca again during the community’s homecoming event in 1955 and he spoke at the worship service.

As the Ithaca Church of God entered another decade it was in need of pastoral leadership that would continue to be effective in and outside of the church. It also needed a young shepherd who would deeply invest his life and many years in the church. As the 1950s got underway that is exactly what happened.