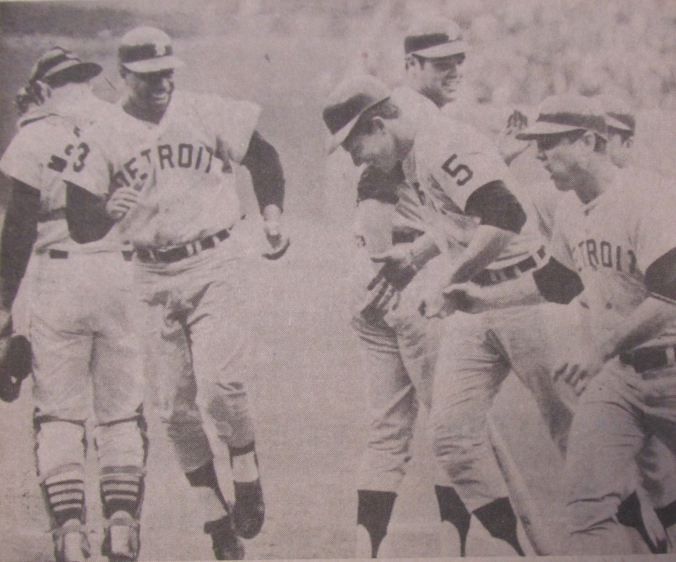 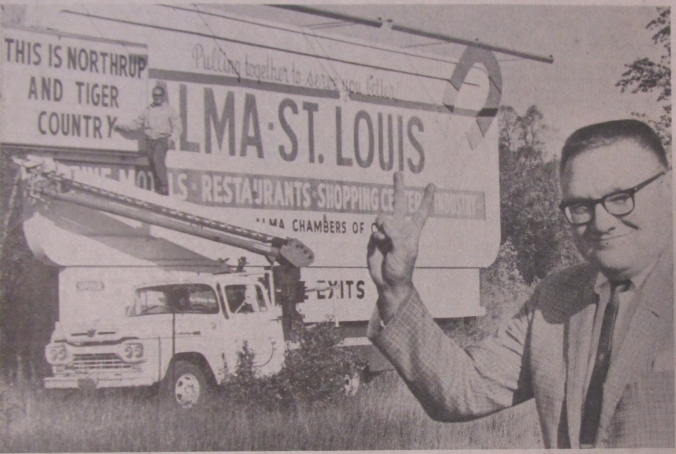 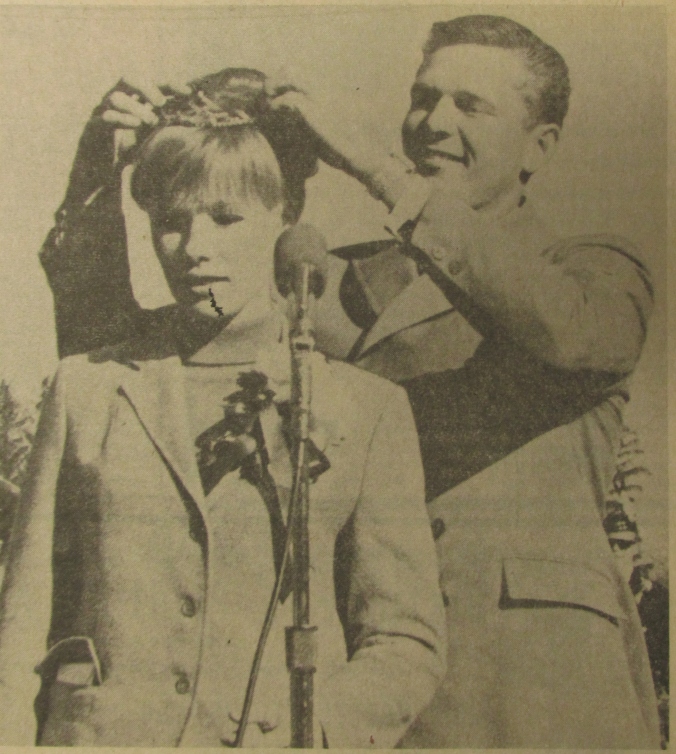 Above: Jim Northrup’s Grand Slam in Game Six of the 1968 World Series led to a 13-1 blowout of the St. Louis Cardinals and set up a crucial Game Seven, which he hit the game winner and gave the Tigers the championship; a billboard south of Alma along US-27; scenes from Jim Northrup Day, October 19, 1968 in Alma. Northrup made a personal appearance for fans, appeared in the Alma College parade and was recognized at halftime of the Alma-Albion football game in honor of “Jim Northrup Day” in Alma, St. Louis and Breckenridge.

The sign along US-27 south of Alma read, “THIS IS NORTHUP AND TIGERS COUNTRY.” The date was October 10, 1968, and the Detroit Tigers had just won their first World Series in 23 years. At the heart of the story was a former Gratiot County native, student, and athlete named Jim Northrup.

After finding themselves in a 3-1 deficit in the World Series, Northrup keyed a comeback in Game 6 when he hit a grand slam by teeing off on the first pitch he saw that afternoon (he hit four grand slams prior to this during the regular season). It helped the team to a 13-1 trouncing of the Cardinals and set up the final game of the series. In Game 7, Northrup broke open a close game in the 7th inning with a triple off of Cardinals great Bob Gibson. It proved to be the game-winner and the Tigers were only the fourth team in Major League history (to that point in 1968) to come back from a 3-1 deficit to win the World Series. Detroit – and Gratiot County- went bonkers.

After being stopped in downtown Ithaca for an interview,  Sandy Brillhart, Nancy Goostrey, Vicki Merchant and Barb Johnson were asked for their opinion about the Tigers winning the World Series. All agreed that “They’re definitely going to win. They’ve been doing so well, they’ll win!” Postal worker Orval Shaw was stopped in front of the Ithaca Post Office where he was taking down the flag for the day. While he did not follow the Tigers as much as his wife did that summer, he thought his wife’s commitment to following the Tigers and that she stayed up late nights to watch many of their come from behind victories convinced him to believe in the Tigers, too. Former Ithaca great Roger Howes also picked the Tigers because of their bullpen, their youth, their depth and how they compared to the Cardinals player to player. Still, as the World Series played out there were plenty of moments when it seemed that the Cardinals were going to claim their second consecutive World Series Championship, especially after being up 3-1 over Detroit.

However, after the dramatic Game Seven win, there were plenty of Jim Northrup supporters in Gratiot County. Northup’s’ high school coach,   Levatt Caszatt, who was principal at St. Louis High School, commented that the “come from behind character” of the Tigers in the World Series was very much the temperament and character of Jim Northrup as a high school player and Alma College athlete. Caszatt remembered that while Northrup was not the player with the most ability on the St. Louis football, basketball or baseball teams that Caszatt coached, he had “a tremendous spirit” and Northrup became an excellent trainer. Alma College coach Art Smith recruited Northup to play football, golf, and baseball at Alma College. As Northrup’s mentor, he knew Jim had determination, that he was aggressive and he always gave 100 percent. Smith stated after the World Series, “ I always thought he was a big leaguer.” Dr. Lester Eyer also recalled the challenges Northrup had as an Alma College student when deciding whether to pursue a career in the medical field or to become a professional baseball player. Eyer stated, “It was a big decision for him to make, between medicine and baseball. We’ve been real proud of him for what he’s done the last two days.”  Fortunately for Detroit and Gratiot County that October,  that is what Northrup eventually became, a world champion.

In recalling the afternoon that the Tigers won Game Seven of the World Series (at that time all World Series games were being played in the afternoon, not evenings), people celebrated in their own way. While cutting hair, Alma barber George Clark almost cut off the ear of the man whose hair he was cutting.  When the go-ahead run was reported over the radio in Game 7, the man jumped up out of the chair and Clark recalled that he almost got the ear in the process.  One young Alma wife could not locate her husband until very late that evening. She expected him home for dinner and when the husband came in late from the bar that night, he explained that he was out celebrating with the boys about the Tigers winning it all. Regardless, she gave her husband a cold dinner. Sometimes for some people in Gratiot County, the hardest part of the Series was just following it. As already stated, these were day games and for some like one unnamed Alma High School student, he lamented to a local newspaper that teachers seldom let students listen to the games. Yet, during Game Seven he found one teacher who had a radio and listened to the action. The problem was that class ended before Northrup’s triple occurred and the scoring really started. Other students remembered getting home from school, or from off of the bus, to hear that the Tigers had just won Game Seven.

There were many well-deserved accolades for this team of World Championship Tigers in 1968, but Gratiot County remembered just one of them. One of the headlines the day after the win read “Northrup’s hit gives Tigers the Series.” A large billboard sign located on the northbound part of US- 27 south of Alma read in bold letters “THIS IS NORTHRUP AND TIGERS COUNTRY.” Later that month, Northrup was honored at Alma College’s Homecoming parade in what was also recognized as “Jim Northrup Day” in Alma, St. Louis and Breckenridge. During the parade, he road atop a white convertible. A large banner in downtown Alma near City Hall read: “Jim Northrup and Alma Alumni…Welcome to Alma—Scotland USA.” Northrup was also recognized at halftime of the Alma-Adrian football game and he crowned Alma College Homecoming Queen Kathy Richards. Prior to the festivities that morning, Northrup appeared at Alma Plumbing and Heating to sign autographs and pose with fans for pictures.

One news column that ran in the Alma Record-Leader after the World Series  was entitled “A Place in Heaven?” It stated that in Gratiot County, “This is Northrup country. And Lolich country, and Kaline, and Cash Country. But mostly Northrup country.” It also concluded “that all good ballplayers, like good Christians go to heaven. But that shouldn’t be a surprise to Jim (Northrup). That’s Northrup country too.”

That October of 1968 in Gratiot County remains a slice of heaven that Detroit Tigers fans have never forgotten, even fifty years later – and a Tigers player and local native named Jim Northrup.