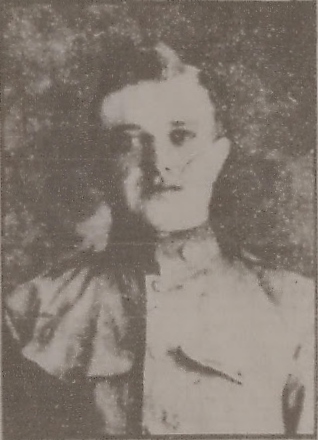 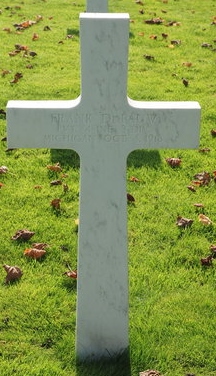 Above: the only known picture of Frank DePauw; DePauw’s grave in the Meuse Argonne Cemetery.

Of all of those men who died for Gratiot County in the World War, there was one that died in France that we know little. His name was Frank DePauw.

Frank DePauw was born in 1898 in Beldboon Dender Loaun, Belgium to Constance and Clementine DePauw. It is unclear what happened to his father or how and when Frank arrived in the United States, His mother lived in Detroit, and at some point in Frank’s life, Clementine sent her son to live with his two uncles, Frederick Maylaert of Ithaca and Frank Maylaert of Pompeii. These two men raised  Frank.

Young Frank DePauw entered the draft when he lived in Pompeii in May 1918. DePauw went to Camp Custer and then left for France with the 85th Infantry Division on the SS Vestis. Soon, DePauw ended up transferring to the 4th Infantry Regiment, 3rd Division. It was while fighting with this regiment that he died on October 4, 1918, in the Meuse Argonne. One record stated it as “Death instantaneous.”

It was a year after Frank DePauw’s death that his mother, Clementine, began to ask questions about the location of her son’s grave.  She initially wanted to have her son sent to Michigan for burial, but she stated in June 1919 that “ (I) have decided to go to Belgium and wish his body to remain in France.” At that time the government had not yet started sending remains back to the United States. A second letter,  written two months later, again asked the War Department, “Kindly let me know where my son’s body is buried in France, as I am going to Belgium, and from there to France to visit my son’s grave.” A third letter, dated August 1919 asked again where her son was at because she was soon to leave for France.

Little appeared to happen regarding Clementine DePauw and her son until almost a decade later. In the late 1920s, President Calvin Coolidge’s administration started a program to allow the mothers and wives of those men who died in France to travel there to visit the graves. These women were a part of the Gold Star Mothers program. The government paid for the expenses of the entire trip. In June 1929, the War Department tried at least twice to locate Clementine DePauw to invite her to travel to France with the program. No response came, and she seemed to have disappeared.

Nothing else remains about the story of Frank DePauw, his mother or his family.

Frank DePauw was approximately 20 years old when he died during the World War in France, a young man who gave his life for Gratiot County. He rests in the Meuse Argonne American Cemetery.