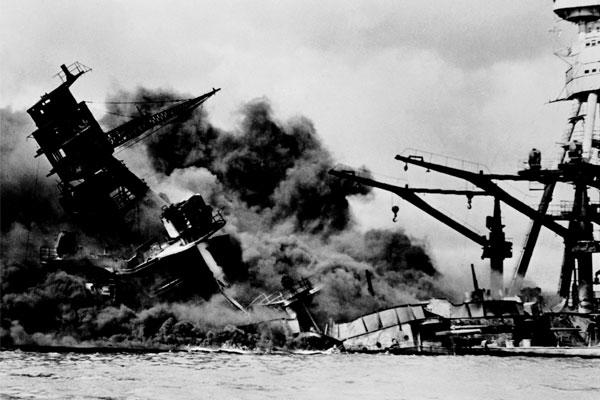 Note: This article first ran two years ago in the Gratiot County Herald. I share it again with this audience In honor and memory of those from Gratiot County who served in the military, and for those who lived through this time in our history.

Seventy-seven years ago on December 4, 1941, it was a “Window Night” in Gratiot County, which marked the start of the Christmas shopping season in the towns of St. Louis, Alma, and Ithaca. Businesses stayed open late with lighted store windows.  That weekend at the Strand Theater in Alma, viewers watched a musical movie entitled “Chocolate Soldier.” Over at St. Louis, the Boy Scouts helped the national defense effort by hosting a paper drive.  A representative from the Public Works Reserves explained to the St. Louis City Council how they could eventually adjust from wartime to a peacetime economy. These events all took place in Gratiot County just days before the Japanese attack on Pearl Harbor. After December 7, the county, like the rest of America, was never the same.

As news of the attack arrived that Sunday, “general indignation” best described residents as they discussed what they had learned. Within hours of the attack, a previously scheduled group of 46 selective service men left for induction at Fort Custer near Battle Creek. Starting December 8, the telephone at the draft office in Alma rang repeatedly. Men who had previously changed their addresses now notified the office about how they could be found to join the military. Some men above the age of 28, who had been previously excluded from selective service because they were too old, now wanted to know how to enlist. In the first wave of men who immediately volunteered through the Alma office, fifteen joined the Navy, twelve went into the Army, while others headed to Lansing and Saginaw to enlist there. The Gratiot County Red Cross announced the week after the attack that the county needed to raise $5,100 for the national fund. Women wanted to sew and knit for soldiers and servicemen at the Alma Red Cross office.

Local families worried about the fate of their sons in the aftermath of Pearl Harbor. One of these involved Mervin DeMott of Pompeii, who was stationed aboard the US Dunlap. Within a week of the attack, DeMott wrote to inform his family that he was safe but he could not say more. Also, his Christmas presents had been mailed home. Marine Corporal Dale L. Peters of Breckenridge was stationed at Wake Island during the Japanese attack, along with former Ithaca resident Private Charles D. Sagash, who was at Corregidor.

Gratiot County readied itself throughout December. Leonard and Mid-West Refineries hired extra guards and put up fences around their plants to protect against sabotage. For further protection, the companies required fingerprints and photo identification buttons for employees. The Gratiot County clerk announced a considerable demand for birth certificates took place in Ithaca because those who wanted to work in industrial plants needed one in order to apply for a job. Amateur shortwave radio operators in the county had their licenses suspended for fear of sending messages to the enemy. County firefighters underwent defense training for handling bombs and volunteers throughout the county learned how to provide basic Red Cross first aid. Lobdell Emory announced that it had received subcontracts for the defense effort, but for security concerns could not accurately acknowledge what it would be producing.

As December ended, citizens continued united in their response to the Pearl Harbor attack. The St. Louis City Council purchased $20,000 in Defense Bonds. In Alma, twenty county men quickly joined the National Guard Unit. By Christmas, one of the first painted “V” for Victory Signs appeared in the east window of the Alma Main Cafe.