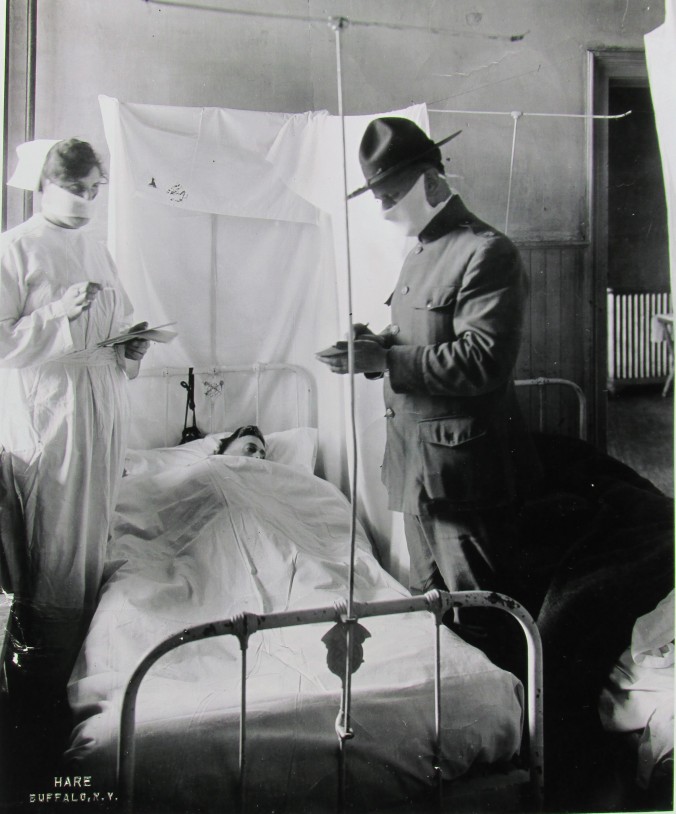 Above: Doctors try to combat the influenza epidemic in the cantonments; notice of travel from Mid-Michigan to Camp Custer, dated September 18, 1918 – only ten days before Camp Custer experienced the epidemic.

Soon after the declaration of war against Germany in April 1917, Gratiot County prepared for the first draft since the Civil War. Today, records of almost 1,000 Gratiot County men show that half of those who were drafted were farmers, and most draftees were sent for training to Camp Custer, near Battle Creek, Michigan.

Built near scattered woods, rolling countryside, and a small creek only 800 feet from its buildings, Camp Custer quickly went up in 1917.  The camp had soldiers barracks that were each built in the shape of an “L.” For entertainment, bored and homesick soldiers attended the Liberty Theatre, which held up to 5,000 men. A library sat next door to the theatre, and the YMCA was there to help soldiers who needed to obtain writing material, books to read, or athletic equipment for games to pass the time.

For the parents, wives, and loved ones of these soldiers, the directions about how to get to the camp became well known. County newspapers told how people could leave from Ithaca, then follow a route through Pompeii, St. Johns, Dewitt, Lansing, Charlotte, Bellevue and end up at Battle Creek. Although it was only 109 miles from Ithaca to Camp Custer, people could drive there in six hours, so day trips were possible. However,  this meant only being able to visit a soldier for a couple of hours. As long as Gratiot County drivers obtained a pass for each person in their car, they were let in and given instructions about how to find their way to the soldier’s barracks. Guards at the gate only seemed concerned about allowing illegal intoxicants into the camp. Anyone traveling by train to the camp would be dropped off a distance from the entrance, but the walk was not too long.  Thus, travel back and forth from Gratiot County to the cantonment was well established by the fall of 1918.

Gratiot soldiers told their families about camp life through their letters. Most described the routine of becoming a soldier; the food wasn’t too bad, but many fought loneliness during their training. Sometimes a Gratiot County soldier came home on a pass to marry his sweetheart, have a short one or two day honeymoon, but then he had to head back to camp.

By the end of August 1918, over 30,000 troops were stationed at Camp Custer, and that was the problem.  On September 15, 1918, 537 men were suddenly admitted to the camp hospital. Less than a week later, on September 21, a day that featured warm weather and pleasant skies, something else seemed wrong. Doctors observed that officers had colds and sore throats; a few suffered bronchitis, which turned to pneumonia.  More men now came in with little or no cough, but they had the sudden onset of high fevers, often reaching 102-105F, respiratory problems,  aching in the bones, and severe prostration. By September 29, a quarantine was declared when 503 men suffered from influenza and another 139 contracted pneumonia. One day later, the numbers jumped to a total of 1,771 sick. By October 3, a total of 952 men were again admitted, filling  2, 125 beds. These admissions marked the peak of the epidemic inside the camp.

In response, doctors and nurses donned masks and placed sick soldiers in a cubicle system to separate the beds. Attempts were made to boil mess kits but this stopped and sterilized tubs were substituted for washbowls which sat near the sick.  Once the hospital filled up, the mess halls, classrooms, the nearby YMCA and Red Cross buildings, and ten wood barracks all held the sick. One had trouble walking through corridors of these buildings because they also filled up with the ill and dying.

As conditions worsened, Camp Custer telegraphed Detroit for more nurses, and over 80 came. At this point, camp officials made another decision. Family members were contacted and told that their soldier was dying. These all rushed to the camp, where a Red Cross nurse met and escorted them to the bedside of their loved one.  Mothers and wives were allowed to be near their sons and husbands if they wore masks. Tragically, as a result of being exposed to the virus, a total of 35 family members had to be hospitalized, and four mothers died.

The way that the doctors tried to treat the rest of the camp during the crisis showed how little they understood about the disease. Healthy soldiers were now told to stay out of other buildings, and they were stripped to the waist and inspected twice a day to see if they were sick. All of their bedding and clothing had to be aired for six hours each day, and spitting was not allowed.

By the first week of October 1918, the camp reached its peak of deaths when a total of 96 men died on October 7. However, more symptoms appeared: severe malaise, complaints of body aches, pain behind the eyes, a deep desire to sleep, a slow pulse, and delirium. Doctors also observed that broncho-pneumonia was now killing more men. The sick also seemed to crave moist foods, so sugar, stews, prunes, and dried peaches were fed to those who could eat.

By mid-October, pneumonia-related cases dropped down to less than 10 percent in the camp.  However, by the Armistice, the final totals of those admitted due to sickness were staggering. A total of 7,687 men had been admitted to the hospital with influenza, and another 2,365 entered due to pneumonia. From these groups, 672 men died. A camp doctor wrote in a final report, “All deaths were from pneumonia (none from Influenza alone).”  This doctor did not seem to cite influenza as a factor relating to why so many soldiers would die.

For Gratiot County, there were direct ties to those in the military who died during the influenza epidemic. Of the thirty World War I dead listed on the All Wars Memorial in Ithaca, eight of them died due to influenza.  Some of these took place in military camps and some in Europe. At Camp Custer, three Gratiot County men died there: Floyd Allen, Earl St. John, and Glenn Heibeck.  Allen (from Alma) belonged to the 40th Infantry, got sick on September 26, and died on October 11. St. John ( from Breckenridge)  and Heibeck (from Hamilton Township)  both belonged to the 78th Infantry and died three days apart on October 8 and October 11. Allen and St. John were listed as victims of “b-p” (broncho-pneumonia). Heibeck’s official cause of death was not recorded.

Today, there were two things that the military and the government did in 1918,  which seem strange given how influenza spread in 1918. First, once the Armistice was announced on November 11, Camp Custer started to release men in mass numbers to return to their homes across Michigan, as long as they stayed south of a line from Bay City to Muskegon. Also, during the onset of the epidemic at Camp Custer, there were instances where men left the camp to go into Battle Creek.  How many of these men were still infected with the influenza virus?

Secondly, a misconception took place about influenza-related deaths. While many people in Michigan (and across the United States) suffered extreme bouts of influenza and survived it, many soon died from pneumonia. It happened that influenza attacked the body, causing so much damage to immunity levels that people could not recover in time to stave off a secondary infection. In many cases, secondary infection would be pneumonia. This “double wave attack” took place in Camp Custer, and it would happen in places like Gratiot County.

By late September 1918, people had been coming and going from Gratiot County to Camp Custer for quite some time. What did it mean? In some way, the influenza epidemic made its arrival here by October 1, 1918, just as the epidemic appeared in Battle Creek.  A giant wave was coming to Gratiot County.

We remember those from Gratiot County who served  in the military and who died as a result of the Influenza Epidemic of 1918-1919: