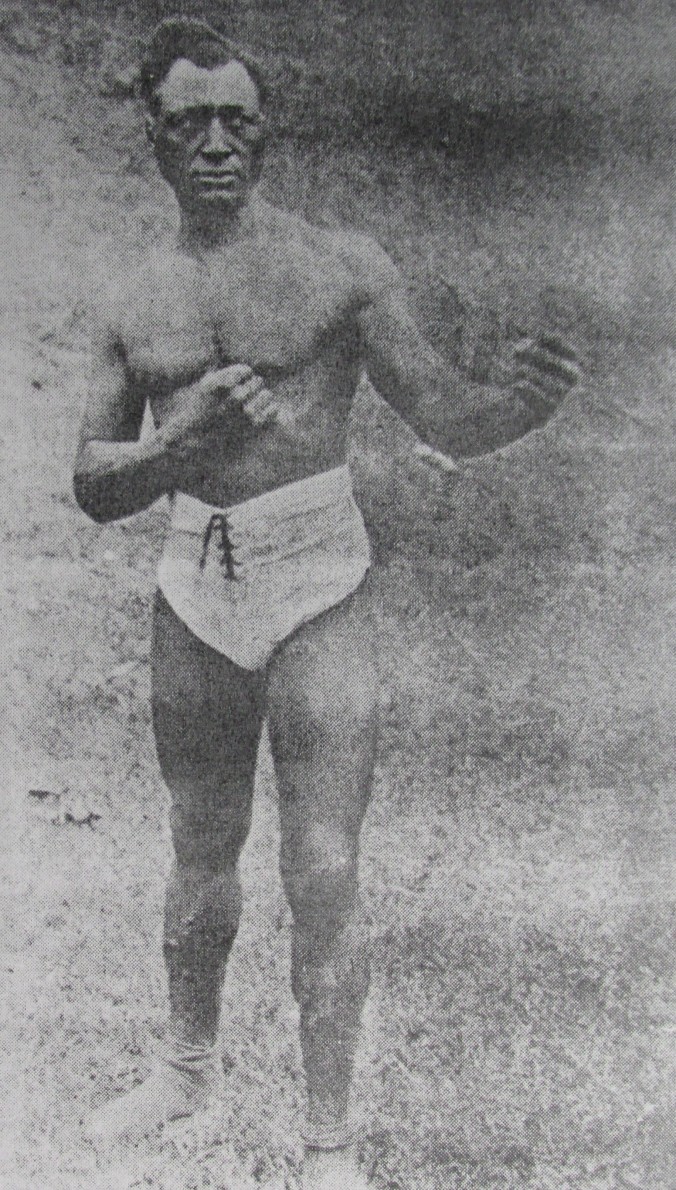 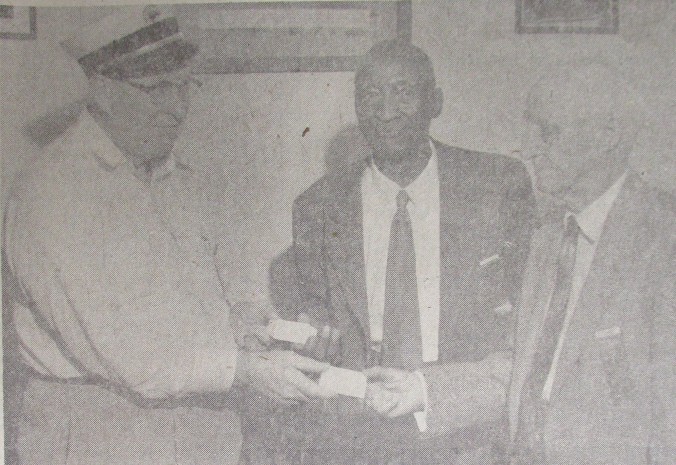 Above: Joe Gage as a boxer while he was in Ithaca; 1895 photo of Ithaca Fire Department with Joe Gage on the far left; Joe Gage and C.D. Peet are given golden badges during Ithaca’s Centennial in 1954 after riding in the parade. Gage and Peet were honored as the last two remaining original firemen in Ithaca.

Sometime in the late 1880s, Ithaca became the home to its first Black citizen, a man named Joe Gage.

Gage was born the son of former slaves on April 10, 1866, in Wilkes Barre, Pennsylvania. His father, Nelson Gage, had been a slave in Louisiana. Joe’s mother, Catherine Gage,  may have been a slave, or the daughter of slaves. The 1870 census identifies her with the racist term “mullato,” signifying that one of Catherine’s parents was white.

Joe was one of seven children, and his father worked as a miner to support the Gage family. Tragically, one source says that Joe was orphaned by the age of eight and that he had to work as a coal miner.

In time Joe, did what many Black men in the North did after the Civil War. They journeyed, looked for work, and explored the country.  After leaving Pennsylvania, Joe moved to Logansport, Indiana, and then to Grand Rapids, Michigan.

In 1887, Joe came to Ithaca and found work in W. F. Thompson’s butter tub factory. Gage liked Ithaca, and he lived in Gratiot County for the next fifteen years. Soon people in Ithaca found more things that they liked about Joe Gage. Joe quickly earned a reputation as a hard worker, and he did other things well,  such as being a professional boxer, which he first took up while living in Grand Rapids.

Upon arriving in Ithaca, Gage continued boxing, even though professional boxing was illegal in Michigan. At that time,  there were things people could do to get around the law and draw crowds and bettors. One way was to advertise matches as “sparring matches.”

One time while Joe was engaged in a fight in the Ithaca Opera House, Sheriff Perry Pettit interrupted the match. During another bout, he was chased off of the Ithaca Fair Grounds. Undeterred, Gage and other men who were involved with the fight headed for Pompeii, where a ring was set in the woods. Early the next morning, the match continued, and Joe knocked out his opponent, a man named Ralph from St. Louis.

In 1890, the Gratiot Journal announced that bills had been printed for “Ithaca’s Colored Champion.” In this case, Joe fought Ed Nesbitt of Detroit, and it turned out to be a fifteen round affair.  Three years later, Joe served as a trainer and second for Albert Eichorn’s match against N.L. Tuttle of Wheeler. The match took place at Holcomb’s Opera House in St. Louis with the purse being $50, and the gate proceeds. In the tenth round, Eichorn was given the win by a foul, and the opera house exploded in a near-riot, and order had to be restored by officers. Supporting his man, Joe Gage was there in the midst of what happened.

Up until 1900, Joe was still boxing in Gratiot County and as far away as Saginaw. Gage stated later in life that he fought 14 bouts, going 10-4 as a middleweight in Ithaca. He weighed 154 pounds, and he stood 5 feet, 10 ½ inches tall.

However, there were other things that Joe Gage did while he lived in Ithaca. In 1890, Joe participated in a minstrel show at the Ithaca Opera House, and he performed in the city’s mandolin club. If someone needed singers for a wedding or concert, they called on Joe Gage, who belonged to a popular quartette in the village.

Most importantly, in 1892, Joe Gage did something as a pioneer in Gratiot County – he became the first Black man to become a part of the Ithaca Fire Department. He belonged to the department for ten years, and he can be seen in several pictures taken of the town’s fire team. In 1894, Gage’s name appeared on the fire department’s cornerstone, which listed the group’s earliest members.

Joe Gage appeared in other events that were written about in the town newspaper. On one Sunday in late February 1900, a fight took place in downtown Ithaca, led by Jack Robinson. Robinson had developed a reputation for his drinking and public drunkenness. On this day, Robinson stood in the open on the main street, inviting anyone to a fight. Unfortunately, Jack Robinson somehow accidentally ran into Joe Gage, who dodged Robinson’s swing and then laid Robinson out on the street with one blow.  Observers appeared to be glad that Joe Gage showed up when he did, and that a public drunk had been dealt with on the Sabbath.

However, Ithaca did not always offer enough work for Joe Gage to support himself. In the winter of 1898, Joe left for Cleveland, Ohio, to work in a meatpacking plant. However, for some reason, Joe quickly returned to Ithaca. Another time during his time in Ithaca,  Gage went to St. Charles to work in the coal mine there.

In January 1899, Gage chose another occupation to make a living, and it was the right choice. He still boxed for a few years, but now Joe learned to be a barber at Leroy Finche’s barbershop. Two years later, he continued his trade by cutting hair at Hatten’s Barbershop in North Star.

In 1902, Fred Sayles and his family, formerly of Ithaca but then living in Flushing, asked Joe to come to Flushing to open an athletic club. Joe went, liked Flushing, and moved there. However, he eventually gave up the athletic club to become one of three barbers in town. Again, Joe Gage was the only Black person in a village.

In a short time, Joe became an essential part of the Flushing community, and he joined the fire department. He also married Ida Tennant from Pontiac in 1911. Ida was fifteen years Joe’s junior, and they made Flushing, Michigan, their home. Although they never had children, both became involved in the Flushing community for decades to come.

Joe Gage’s reputation in Flushing grew over the decades. He was the main barber in town when bobbing came into fashion with women’s hair in the 1920s. Gage also developed a reputation for giving a young boy his first “shave” by lathering the boy up and then shaving the child with the backside of his barber’s comb. He had a knack for storytelling, and Joe was the best whistler in Flushing. His singing voice and the way he treated others became his trademarks.

Over the years, the Gages were respected and honored citizens in Flushing. Back in Ithaca during the parade for the town’s Centennial Parade, Joe Gage was invited to ride on a fire truck, along with C.D. Peet. The two men were at that time the oldest surviving original firemen in  Ithaca. After the parade, both Gage and Peet were guests of honor at the Ithaca Firehouse, and both men received gold badges.

In 1954, Joe Gage retired as a barber in Flushing at the age of 87. A group of local businessmen wanted to honor Joe with a birthday party (his wife Ida had passed away several years before). What Joe and these businessmen did not understand was the scope of the influence, reputation, and character that Joe Gage had upon people in mid-Michigan.

Soon, more people found out about Joe’s birthday party and his retirement, and they also wanted to attend. What initially started as a luncheon for a few people soon became an event that drew 1,300 people to Flushing to honor Joe Gage. It became the biggest crowd that the village had ever seen up until that point in Flushing’s history. A group of six people from Ithaca went to the ceremony, including Lynn and Georgiana Peet Miller, C.D. Peet, Fred Howes, Jr., and Mr. and Mrs. Paul Kernen.

Overwhelmed by the number of people who came to honor him, Joe Gage stood up during the ceremonies and said, “I don’t know what I’ve done to deserve all this. I don’t think I deserve it. I’ve lived a long life, and most of it’s been a happy life, especially the part I’ve lived in Flushing. If I ever had it all to do over again, I’d like to change only one thing.”

And then Joe Gage said this: “I’d like to be born with white skin. I just keep wondering what it would have been like. I’m not finding fault. I’m just curious. But if I couldn’t change it, and if I had it all over again, I’d make tracks for Flushing just as fast as I could, God bless you, everyone.”

This last statement is the only one on the historical record that Joe Gage ever made about race – either in Flushing or in Ithaca, Michigan.  In his lifetime, Joe Gage never tolerated being called the n-word – and he openly confronted anyone (fellow barbers or citizens) who did. Joe Gage lived and demonstrated what dignity was.

In his lifetime,  Joe Gage believed in treating people the way that he wanted to be treated, regardless of race. In Ithaca, he lived here well over a century ago, but Gage is still relevant today.

We do well in 2020 to remember how this Black man lived as a pioneer in Ithaca and Gratiot County.

2 thoughts on ““His Name was Joe Gage: Ithaca’s First Black Fireman, Boxer, Barber, and a Gentleman””