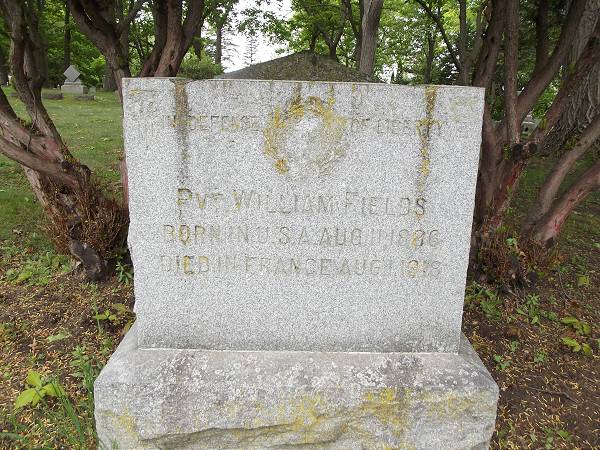 Above: The only known photograph of William Fields, August 19, 1918 issue of the Alma Record; his draft registration card; Fields’ resting place in Oak Grove Cemetery in St. Louis.

William Fields was born August 11, 1886, in St. Louis, Michigan to Marshall and Hattie Fields. He also had two sisters, Helen and Mabel.  William’s father, Marsh Fields, was well known in St. Louis because he was the proprietor of the Marshall Fields Grocery Store in town. The Fields Grocery was known as a tidy place which used a delivery cart which was pulled by a white horse. It was said in St. Louis that the white horse was sent to France during the war and was killed there.

William Fields married his wife, Helen Montey, on August 1, 1916 in St. Louis. He worked as a grocer for his father before entering Camp Custer on September 5, 1917. A month later, he was transferred to Camp McArthur in Waco, Texas where he joined Company D of the 125th Infantry, 32nd Division.  On July 31, 1917, William Fields was killed in France at the Battle of the Marne (although newspapers reported that he died August 1). Fields was killed by shell fire in the Bois de Crimpettes, near Cierges, France.

Soon, news reached his wife Helen in St. Louis about his death.  Sergeant Walter Johnson, a soldier who served with Fields, oversaw the burial in France and he wrote a letter home to Helen.  Johnson explained that Fields “volunteered to locate a machine gun nest, which he did successfully; but was killed on his way back to his platoon, as were many of our boys on that day.” Johnson placed Fields’ identification tag on his cross and he gave one to the chaplain who performed the burial.  The letter continued, “Mr. Fields was one of our best soldiers and also one of our most faithful and bravest men. He was to have been promoted that day he was killed. He was recommended by his Captain for bravery in doing what he did. His death was caused by the bursting of a shell. He died instantly, about 10 a.m…Your husband died doing his duty, faithfully and bravely for his country.”

In February 1919  Helen Fields wrote to the War Department requesting information about when her husband would be returned to her in St. Louis.  It would not be until January 1921 that the government wrote back to tell her that William was on his way home. In late July, Fields was one of 86 Michigan men who came home aboard the SS Wheaton. A funeral service was held in St. Louis and William Fields was buried in Oak Grove Cemetery.

William Fields left behind a widow, his parents, and two sisters. William Fields was 31 years old when he died serving Gratiot County in the Great War. The American Legion Post in St. Louis was named after him in his honor.