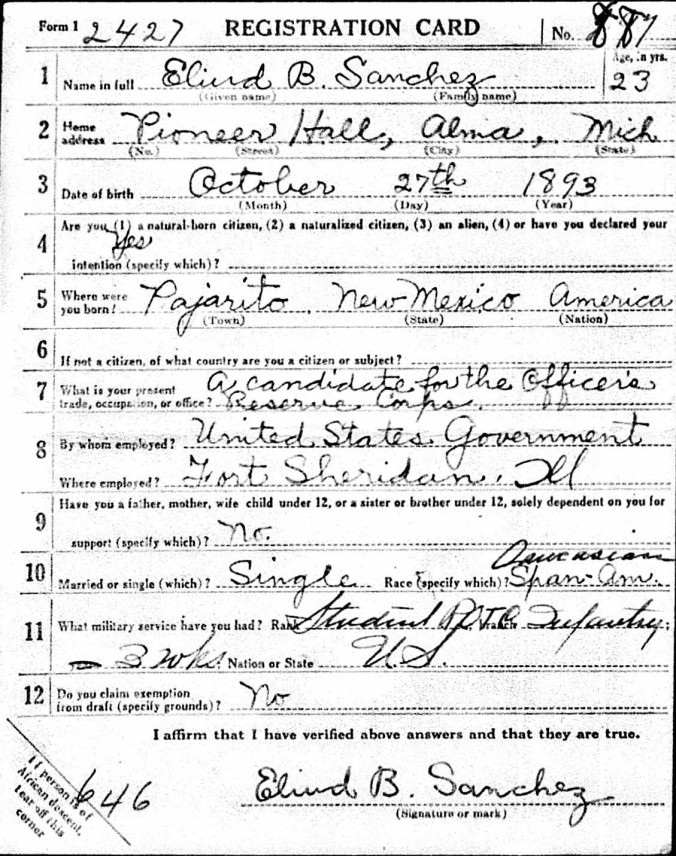 Of the thirty men who died while serving Gratiot County during World War I, Eliud Sanchez was unique: Sanchez was the only Mexican American soldier.

Eliud B. Sanchez was born October 27, 1893, in Pajarito, New Mexico. He did have one brother, Patricio B. Sanchez, and that is all that is known about his family. How Eliud got to Gratiot County, why he came, and how he enrolled at Alma College is a mystery. Did he come north to work in the fields? Did he have a family with him or did he come alone? We simply do not know.

In a sense, Sanchez represented a problem that was encountered during the war. Mexicans, Indians, and Blacks all saw their military service as a way to prove that they were loyal Americans and that they deserved equal rights. Many in these groups volunteered to join the Army to prove that they too wanted to be treated fairly as Americans. As a Mexican, Eliud Sanchez came to Gratiot County at a time when the United States and Mexico had experienced intense border disputes, invasions and the threat of war. Because of this, many Americans in the North (like Michigan) looked down upon these immigrants. On the other hand, Mexicans started a pattern in the 1910s because Gratiot County needed seasonal laborers who did the hard work in the beet fields.

Somehow, Sanchez found a way to enroll for studies at Alma College before the United States entered the war in 1917. While he was there, he became a part of the Phi Phi Alpha Literary Society, which was made up of 35 students. Eliud did not have high grades in any of the classes that he took, however, he was very interested in oratory (public speaking).  His oratorical speech, “The City with the Soul,” was entered into state competition, along with seven other Alma College students. He also appears listed as a junior in the college yearbook.

On May 13, 1917, Eliud Sanchez left Alma College, along with another student, for service in the Army. He was sent to Fort Sheridan, Illinois with his hope of becoming a candidate for the Officers Reserve Corps. On his registration card, he listed his home as being Pioneer Hall at Alma College, that he was Spanish American (someone wrote “Caucasian” above it), that he had been in the Student Reserve Officer Training Corps for three weeks, and that he had been employed by the United States government. Sanchez also stated that he was short, with a medium build, brown eyes and dark hair.

While he had hopes of receiving an officer’s rank in the Army, he failed to obtain it. Sanchez returned to Alma and then worked at the Republic Truck Company until being drafted in early 1918. Because of his prior training, he became a corporal and was assigned to Company E, 334th Field Artillery.

Tragedy struck on August 22, 1918, when Eliud Sanchez died as the result of a drowning incident at Camp Dix. It was never explained how or why he died the way that he did. It was stated that there was a plan for a military service in Alma once his body returned home. It was said of Sanchez in the newspaper that he “came to Alma four years ago from New Mexico, and penniless worked his way through college, representing (Alma College) at the Michigan Intercollegiate Conference.”  The college newspaper wrote that Sanchez was “earnest, smiling, (and) simple-hearted.” The name of the person who signed for his body to be returned to Alma was Dr. William H. Mason of Saginaw, Michigan. A Gold Star was also placed on the Alma College flag to represent his death.

Today, the only memory of Eliud B. Sanchez is his marker which is in Alma’s Riverside Cemetery, pictures from Alma College yearbook and newspaper, and his registration card.

Eliud Sanchez was a  man who died serving the county during the Great War because he hoped to show that he was a member of the Alma community. He was twenty-four years old when he died.