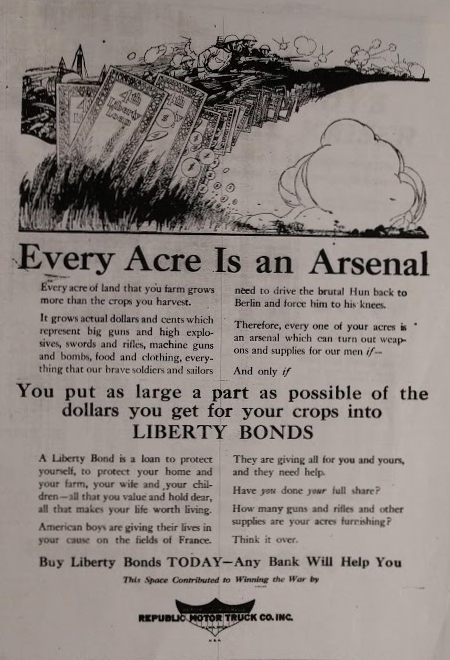 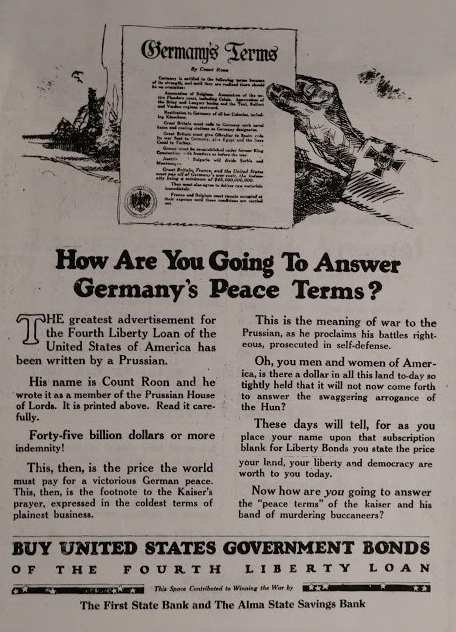 Above: Advertisements from October issues of the Alma Record.

October 1918 in Gratiot County was known as the time of the next big Liberty Loan drive. It was announced that the Fourth Drive was most important to the winning of the war. The County War Board quickly made it known that a list of “non-buyers” of Liberty Bonds would be published in the newspapers. A Vigilance Committee was also formed to “round up slackers” who were “men of means, who are making to hide behind fifty dollar subscriptions when they should take  several times that amount.” A personal, handwritten letter from President Wilson appeared in the Alma Record telling the public why it was important to buy more bonds. Alma mayor Frances King announced that Friday, October 7 was a “Loan Holiday” in town and all businesses were closed to allow bond sellers to circulate around town and out in the countryside.  At times that October speakers appeared in various locations to whip up support. One of these took place at Alma High School’s auditorium where Dr.J.M. Magil, who once been to Germany, addressed a large crowd there. He also gave a similar speech at the Republic Truck Company.

Advertisements urged Gratiot people to buy bonds with titles like: “There’s a Soldier Facing Death For You…BUY, BUY, BUY A BOND.” Another warned readers that “The Princes of Germany are Shaking Dice for the United States – Buy Bonds.”  Other titles were “How are You Going to Answer Germany’s Peace Terms?” and “The Enemy is Watching: Lend the Way Our Boys Fight-To Your Utmost.”  In Alma, the drive was so successful that by mid-month it was announced that the city would actually double its quota.

Other county schools remained involved in the Liberty Loan drive as well. Down at Middleton,  a parade took place from the school down to Mertz’s Hall, where a Liberty Loan meeting was held. A similar meeting was held over at the Perrinton School.   Other locations in the county had church sponsored drives, such as in Breckenridge where $5,000 in bonds was sold at three churches. Sales over at St. Louis went so well that the city was the first precinct in the state of Michigan to “go over the top” by meeting its $40,750 goal from 694 people who volunteered to buy bonds. As a result,  St. Louis received an honor flag at a ceremony at the opera house after the thirty-piece Jackie Band from Great Lakes Naval Station entertained the audience.   Other places were also so successful to the bond drive that Alma, Ithaca and Elba Township all received their own Honor Flags as well. While all of these bond sales took place, a new idea was emerging in Gratiot County that happened over the next few years. Car dealers (and later banks) would accept Liberty Bonds and War Savings Stamps as part payment for car sales and loans.

During that fall people were being asked to think ahead to Christmas and local men who were overseas. In early October, instructions were given regarding sending Christmas packages to the front. In order for the Red Cross to deliver a package from the family, each soldier had to fill out a label telling from whom they would like to receive a package. The Red Cross furnished specially sized boxes to residents and the box then had to be turned into the local Red Cross unit in order to be mailed.

Five hundred soldiers rolled into Alma aboard the local trains this month in order to drive Liberty trucks overland to the East Coast. At Alma College, induction papers arrived for fifty men and they were then made members of the SATC service. More students on campus were waiting for more induction papers.

And then there were monthly letters from soldiers abroad. L.Verne Buckborough wrote home from France about the abundance of war souvenirs that could be picked up on the battlefield. German helmets were especially prized. Glen Sergeant of Ithaca wrote home that he had been wounded twice, but he claimed to be okay after wounds to the head and his back. Harvey Brillhart described how French families drank wine like the way Americans drank coffee. However, since it had no sugar in it Brillhart would not drink the wine. E. H. Loudenbeck of Perrinton was satisfied with his $39.50 in monthly pay. Still, too many fellow soldiers were soon broke because they gambled theirs away. Although Floyd Thomas had spent time in the trenches, he had yet to catch “the cooties.” Having two cats in the trenches with his group helped to keep the mice population down. One of the most unusual of letters that month came from Miss Viola Smith, who had a sister in Ashley, and who was a Red Cross nurse in France. She wrote that Base No. 11 was “a long way from Tipperary” but it was safe there.  Working in a tent of fifty soldiers who had been gassed was especially sobering for her.

The Red Cross kept up its work in Gratiot County. Relief for Belgium was a goal of many of the works that women did. One volunteer in Alma brought in a completely new baby’s outfit consisting of twenty articles made from fine wool. The Red Cross noted that this was donated by “a generous patriotic woman” in the community. As the flu epidemic broke out women were asked to wear face masks when they entered the workroom.  People who attended the Red Cross benefit at North Star voiced their concern about the village having its own Honor Flag and so they pitched in seven dollars toward purchasing one. Over at Newark Township, the Red Cross provided seven comforters and fifty-six articles of clothing for Belgian relief. The comforters were made in just four days with help of children from four schools in that township. Mennonites also contributed one quilt that had a log cabin on it. Attendance was growing at Newark with twenty-four workers at the previous work session.  It was also reported that the Bannister branch of the Red Cross raised nearly $500 the previous month.

The public continued to be absorbed with the war. A War Exhibit Train arrived in the county to promote Liberty Bond sales. It was estimated that 10,000 people saw the train when it appeared in Alma with its collection of weapons and armaments from the Western Front. A hot movie that drew people to the St. Louis Liberty Theatre was “Over the Top,” a movie which depicted the life of Sergeant Arthur Guy Empey’s story of fighting on the front in France. A Liberty Day Celebration was held at the Ithaca fairgrounds on what was called a national holiday to raise money for the war effort. Farmers were encouraged to build new buildings for hogs, to store grain, or food for livestock only if improvements were necessary. Permits were not needed for construction on farms if it did not exceed $1,000 and if the farmer did not use skilled labor for a building. An Ithaca resident, Aaron Page, told of his stay in Russia before and during the revolution there. Page stated that he had worked as a driver in the Czar’s racing stables.

October also saw a rise in the movement for women’s suffrage in Gratiot County.  Notices were placed in the newspapers by women who asked readers to vote for suffrage. A total of 280 women from Alma’s Fourth Ward signed one advertisement petitioning for votes in the state’s November 5 election. Several businessmen also donated their space in newspapers at the end of October and urged the public to support the measure.