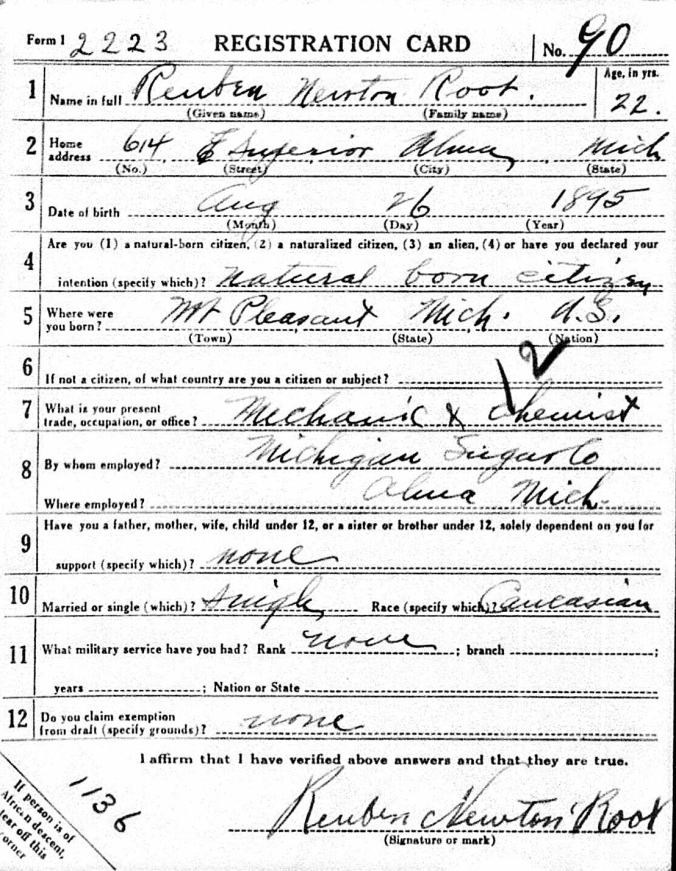 Above: Reuben Root’s Report of Death; his marker in Riverside Cemetery in Alma; Root’s Registration Card for Gratiot County.

Reuben Newton Root was born on August 26, 1895, to Milton and Dora Root in Lincoln Township in Isabella County. His father was a farmer at the time. Sometime prior to 1910 Reuben Root moved to Alma and lived there when his mother remarried.   Root found work as a chemist and he took a trip with a friend to San Juan, Puerto Rico in early January 1918. Shortly before this, Root was called for an exam prior to his trip and then he was called to service only a few months later.

Records show that Reuben returned home to Gratiot County, via  New York,  in time to enter the Army in May 1918 at Fort Sheridan. He first was a Private in Troop E of the 312th Cavalry, then he was soon promoted to Corporal in the 5th Company at the Central Machine Gun Officers training camp.

In late September, tragedy struck. Root was at  Camp Hancock, Georgia when he was stricken by influenza and bronchial pneumonia. His date of death was September 27, 1918, and a notice of his death appeared in the Lansing State Journal three days later. He left a $10,000 insurance policy to his mother, Dora Flansburg, and his remains were shipped to Alma for burial where he rests today in Riverside Cemetery.

At his death, Ruben N. Root was only twenty-two years old.