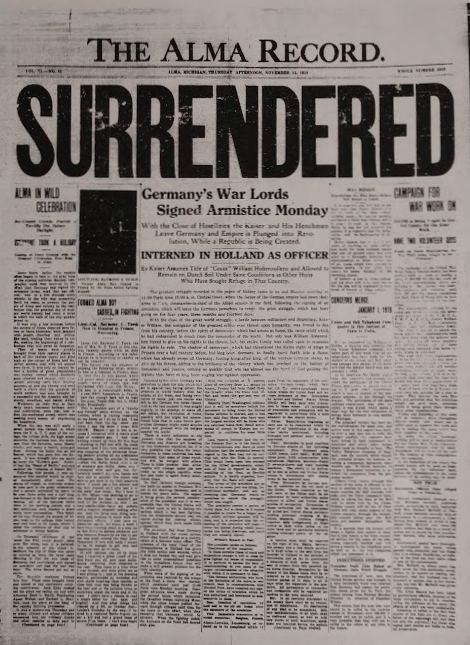 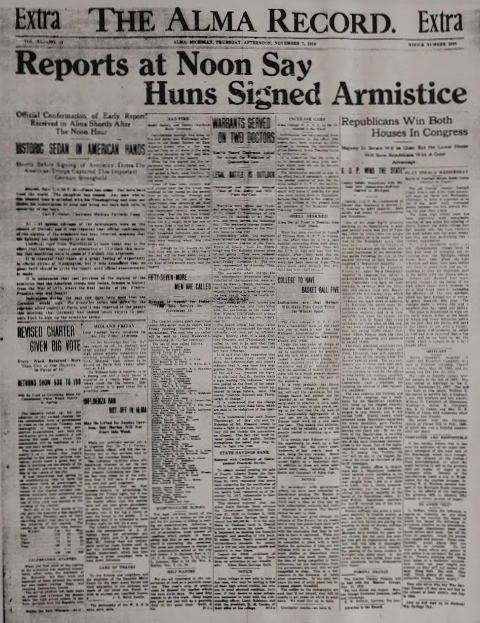 Above: an issue of the Alma Record published on November 11, 1918; below is the front page of the issue published one week earlier for “the false peace.”

“SURRENDERED”  was the title of a local newspaper signifying the events on November 11, 1918, in Gratiot County.  Germany surrendered and the war that Gratiot County had fought for nineteen months was officially over – and people went wild.

Newspapers initially said the war was over in Europe on November 7, but negotiations between the Allies and Germany would take place for another three days. “The false peace of Thursday last” was the phrase used by many at that time, but people tried to celebrate anyway. When the official peace was declared on November 11 at about 3:00 a.m.  Gratiot time, some people immediately started marking it in bigger ways. This time, schools, stores, and businesses shut down as thousands of people across the county took to the streets wherever they lived. In many places, the celebrating took place at different times throughout the day.

In Alma, after bells and whistles went off, deserted streets that morning were quickly filled with crowds of people. Piles of boxes were located and quickly stacked on the corner of State and Superior streets to have a bonfire. Hundreds danced around the fire and people who were on their way to work got lost in these masses. Alma College students, many who were in the SATC program, joined in, as well as workers from the Liberty Truck company. An old hearse was converted to a float and then used to carry the Kaiser’s goat. Another float that came behind had the remains of the Kaiser and another went down the streets with the depiction of “the Beast of Berlin.” At noon, another parade was organized and it proved to be three and a half miles long, starting at the Republic Track Factory and wound through the town to Alma College, then it turned east and headed for St. Louis.

Ithaca held its celebrations early that morning. Henry McCormack set off a collection of fireworks from atop the Gratiot County Herald that he had been saving for two years. Automobiles went through the streets, people shot off all types of guns, church bells pealed, children played horns, and bonfires were made by many in town.  School in Ithaca closed at noon and Mr. Struble, who owned the local movie theatre, set up his projector outside and gave a free show.

When Breckenridge got the news, people in town could not sleep even if they had wanted to. An observer noted that “everyone was more enthusiastic and mad with joy and more noise was made then during the previous celebration.” Middleton and Perrinton celebrated with “peace parades” through their villages. Twenty-eight automobiles were in line, all decorated with flags, one with a trailer that contained the body of Kaiser and another with a riddled German flag. The Perrinton sharpshooters followed on another float, all making noise with horns, pans, and drums.  After a short program in Middleton, the caravan returned back to Perrinton. Probably this parade was tamer than the one held a week earlier during “the false peace.” Someone in Middleton at that time accidentally shot down the telephone cables and Middleton lost telephone service.

Many over in Ashley rang bells and fired guns early that morning, but the real fun did not start until 7:00 p.m. that night on the school grounds. People there hoisted an imitation of the Kaiser up a flagpole which was then shot down. The excitement lasted in Ashley for two hours that night.

Just across the west county line, no one in Vestaburg had witnessed such an outbreak of patriotism in that location’s history. More than one band led people through the streets, stopping at the homes of Civil War veterans along the way. Ben Corder, a Civil War veteran, played in one of the bands, using the drum he played when served during that war. A huge bonfire was held at the bank corners where an effigy of the Kaiser was burned. Rachel Kemmerling, age 87 and the mother of a local pastor, marched from her son’s parsonage down to the Ferris Church where she raised a flag up the flagpole and started ringing a bell.  No Fourth of July celebration in Vestaburg ever compared to the fireworks, dynamite, firecrackers, and guns that went off there late into the night.

“The Great War”, “The World War” and “The War to End All Wars” was now over for Gratiot County.