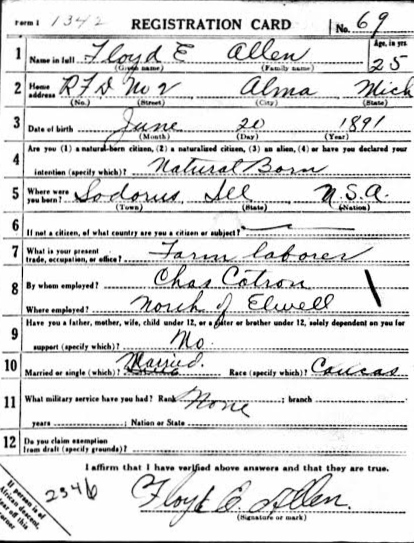 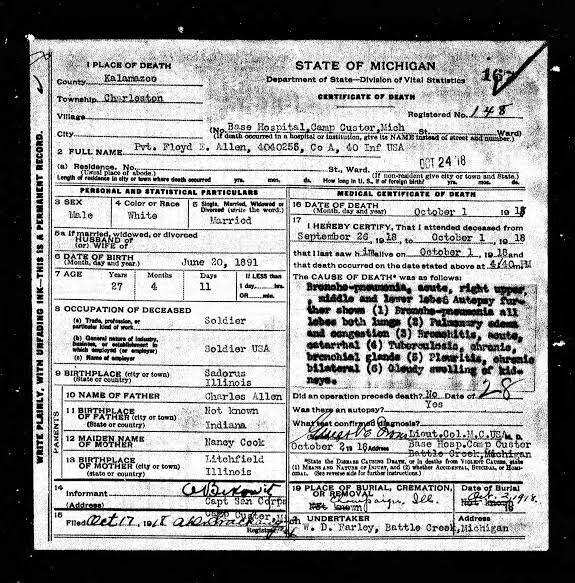 Floyd Edward Allen was born June 20, 1891, to Charles and Nancy Allen in Champaign County, Illinois. He had one younger brother and one older half-sister.  Although his father was a farmer and the family remained in Illinois, Floyd Allen’s connection to Gratiot County came through his wife, Anna, who was from Alma. On June 13, 1916, the couple married in Wayne County, Michigan.

On June 5, 1917, Floyd Allen answered the call and registered for the draft in Alma, Michigan. At that time, Floyd and his wife were living north of Elwell where he worked for Charles Catron. Upon induction to the Army at Camp Custer, he became a part of the 40th Infantry, Company A.

Floyd Allen met a tragic death when he became the first Gratiot County soldier to die in the Influenza Epidemic at Camp Custer. At the very end of September, the flu virus reached the camp. Over 6,000 men became sick there during October and November 1918. Of this group, over 600 died from influenza. Floyd became sick on September 26 and he passed away on October 1, 1918, at 4:40 p.m. from broncho-pneumonia in both lungs, making him among the first to contract and die during the epidemic.

Allen’s body was returned home to Illinois where he was laid to rest in Craw Cemetery in Sadorus, Illinois. At the time of his death, Floyd Allen was only twenty-seven years old.