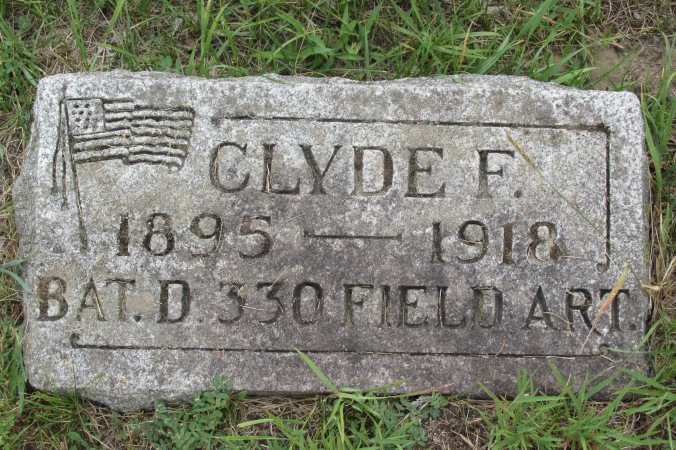 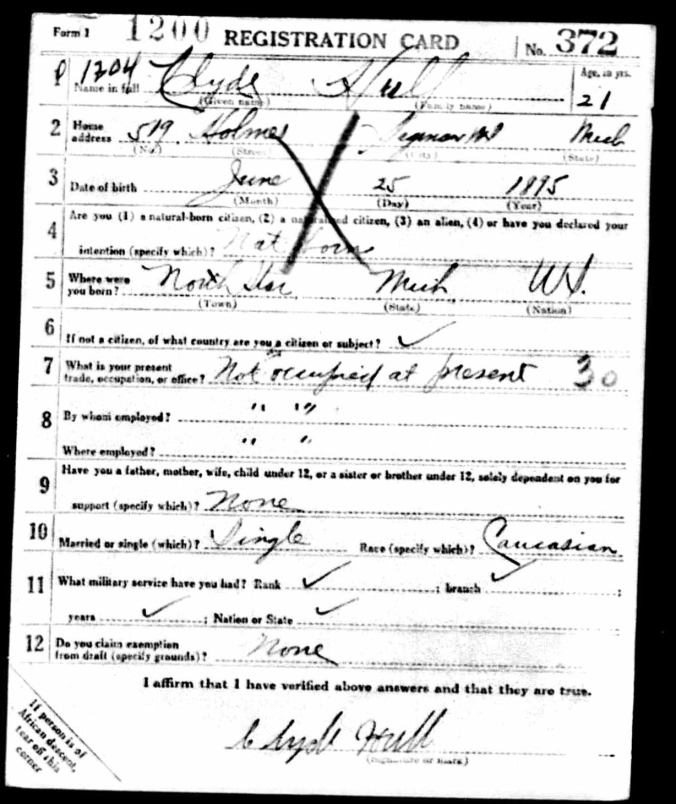 Clyde Franklin Hull was born June 25, 1895, in North Star to Frank and Fannie Hull. By 1900 the Hull family had moved to Bengal Township in Clinton County and family included siblings Jessie, Orpha, and a brother Dillis. Clyde’s father was a farm laborer, and the family probably lived in Saginaw County at one time.

On March 14, 1918, Clyde married Marie Nass in Ithaca, and they moved to Saginaw, where Clyde worked as a glass worker. Part of Clyde’s tie to Gratiot County was that Marie was from Washington Township.

Clyde registered for the draft in Saginaw Township, and he was drafted on June 28, 1918, into the Army. The Hulls had been married for just over three months.  Clyde ended up in Camp Custer where he was a Private in Battery D of the 330th Field Artillery, and he sailed for France in July.

Clyde was like a few other Gratiot County men who went to France and then contracted pneumonia and died, probably in the wake of the Influenza Epidemic. Sadly, his death came on November 27, 1918, just over two weeks after the Armistice was officially signed. Even more tragic, Marie Hull found out about her husband’s death a few days after the birth of their daughter, Lois.

Records do not tell us much else about Clyde Hull except that he was unique among the others who died in France: he was the first to be sent home. In late August 1920, his body, accompanied by Private Baird of Company C of the 13th Infantry, came to Ithaca. The funeral took place at the Ithaca Presbyterian Church, and six Ashley men who served overseas in France served as pallbearers. He was laid to rest in the North Star Cemetery.

Clyde Hull was twenty-three years old when he died in France.