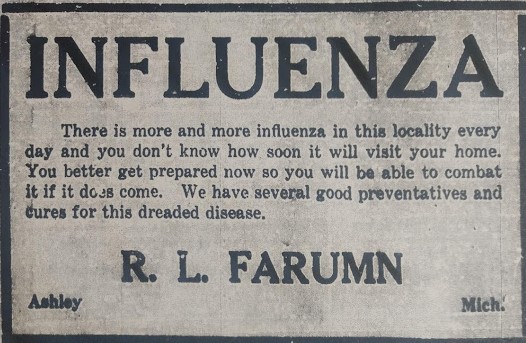 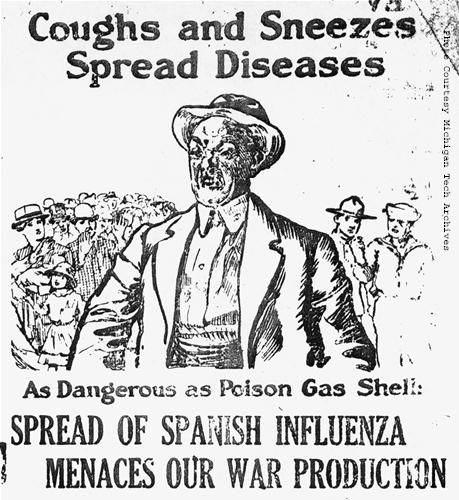 Early in 1919, Gratiot County, like the rest of the United States, tried to survive the succeeding waves of the Flu Epidemic. After the second wave of the virus seemed to subside around New Years, a third wave began in late winter. Many hoped that the epidemic would end by 1919,  but people in Gratiot County continued to get sick and die. It would turn out that influenza had not yet finished in Gratiot County.

Several communities ended their quarantines, believing that the virus had passed. Now, other diseases affected people who encountered influenza. In Riverdale, the town experienced an outbreak of diphtheria.  In East Alma, typhoid fever could be found. These diseases came about after the government warned the public about how victims of influenza could be susceptible to tuberculosis, diphtheria, and scarlet fever.

In January, people continued to appear in large groups, appearing unconcerned that diseases could be transmitted from person to person. Riverdale opened its roller rink after closing it for six weeks due to the epidemic, and a large crowd turned out on that Saturday night. Southeast Coe lifted the quarantine there, and the church quickly reopened. Elder Start felt so good that he gave two sermons on that Sunday. The Alma Red Cross restarted its work in meeting rooms in the Pollasky Block, determined to make more pieces for the destitute in Belgium. A new organization, the Gratiot County Good Health Society, held its first meeting in Alma in the Director’s Room of the First State Bank. The organization was formed to promote good health in Alma.   In Breckenridge, quarantines on the households of Chauncey Sheppard and George Coleman ended, and families started going out into public. Out west of Ithaca, 25 people gathered at the home of Freda Goodspeed, who was celebrating her tenth birthday. It was reported that the large group enjoyed the party. In all, people did not seem concerned about meeting in large groups in the wake of the epidemic.

And yet people kept dying.  The death of W.G. Ballman, who operated the cafeteria at the Republic Truck Company in Alma, shocked many people. Ballman died after being sick one week. In Southeast Coe, Mary Myers, age 16, died from influenza, followed by pneumonia. She was quickly buried in Pleasant Ridge Cemetery. Farmers in Breckenridge found it hard to believe that Earl Whitney, who had a family and lived north of the village, died at the age of 28. He also was quickly buried in Ridgelawn Cemetery.  Whitney left a young wife and two small children behind. Another shock that month took place in Alma when Fred Von Thurn, a former Republic Truck employee who was well known in town, died after a week of battling influenza. Probably the most encouraging news for Gratiot County amid the deaths was that the number of those reported to be sick seemed to be declining.

After these things took place, another wave of influenza struck the county in February 1919. Of the many hot spots, Breckenridge was especially hard hit. Someone in Breckenridge despaired that “The flu seems to be sweeping our town and community.”  On February 3, Doctor Drake reported that he had 36 new cases in his care.  In St. Louis, Doctor H.B. Pettit had relapsed to the extent that another doctor had to be called in to care for Pettit. Quarantines quickly took place in St. Louis. Clarence L. King, age 25, died of influenza, and a private funeral took place for him. Residents in St. Louis also were shocked when Fred A. Bieber, a well-liked bank employee, died at the age of 29 from influenza. The St. Louis Leader published an extensive story on Bieber’s service to the city and his sudden death. Another young man, Dean Mitchell, age 28, died in Hamilton Township. These deaths took place amidst the reappearance of diseases in a town like diphtheria and typhoid fever, which took the life of eleven-year-old Ernest Tenney in St. Louis.

As the epidemic slowly passed that month, the biggest news in February involved the results of the Thornburgh trial in Ithaca. Doctor Frank Thornburgh and Mrs. Holcomb from Mt. Pleasant were tried for violating the quarantine of the Worden home in Alma the previous October. When young Albert Worden became ill, Dr. T.J. Carney, the city’s Health Officer, arrived and diagnosed Worden with influenza. Carney also ordered that a sign be posted that the household was infected. Mother Worden called for another opinion, calling in Mrs. Holcomb and Dr. Thornburgh, who said that the child had typhoid fever. The family removed the sign and put one up that read “No Influenza.” From there, city officials again changed the sign, and the health board and mayor issued a warrant to arrest Thornburgh for violation of the health laws. Now, the trial finally took place, and after a long two-day trial, the jury announced at 11:00 pm that Thornburgh was guilty. The doctor then filed an appeal. Eventually, Thornburgh paid a fine and planned to move away. However, he practiced in Alma years later.

At the end of the spring, influenza managed to wipe out the family of Adelbert “Dell” Lane, a well known Ithaca resident. Lane’s wife contracted cancer and passed after two operations. Before her death, Dell Lane had heart trouble and died. Their son, Harry Lane, a teacher who lived in the East, made the trip home to bury his parents. After settling his parents’ affairs, Harry left for home and quickly contracted influenza, which turned to pneumonia. A telegram arrived in Ithaca the next day telling friends how the grim reaper, wiped out an entire family in only a few weeks.

From spring 1919 through New Years 1920, little seemed to be written about influenza. That changed starting in February 1920 when another outbreak took place with the intensity of what happened in 1918-1919.

Every part of Gratiot County again suffered from a flu virus, spreading out in the countryside, closing schools and churches. Only five people were reported as having died. However, there was a long, long list of the sick. This outbreak lasted well into April.

Newark Township was one of the first places to report, and the township suffered greatly. After listing the sick, the writer said, “Here is hoping that your correspondent will not have to write about so much sickness next week. May all who are sick be restored to health.”  South Fulton Township also had problems with influenza. “Nearly the whole of South Fulton are sick with the flu,” said an observer. At least eight families were then named, like the Days, Litwillers, Harters, and Fields. Schools in the different townships closed, sometimes because the teachers were too sick to teach. Telephone operation in Forest Hill was in trouble as the operators were sick. Forest Hill also closed schools as teachers and the superintendent became sick.  A common observation was that the doctors across the county could barely keep up with treating the sick, even as the numbers declined.

Late in February, it was reported that “The influenza epidemic has been gradually gaining hold in St. Louis until it has reached a point where the physicians have about reached their capacity for caring for cases.” The schools in St Louis also went closed. During the first week of March, people in Breckenridge were excited as no new cases had been reported, and individuals seemed to be recovering. Still, Doctor Huebner, the new health officer in Ithaca, had trouble keeping up with the posting of quarantine cards in Ithaca in mid-May because too many Ithaca families were sick. Sprague’s Drug Store in Ithaca ran an advertisement that May, which urged “BEWARE OF THE FLU.”

Those Who were Sick: